Book: “The Baker Who Pretended Be King of Portugal” by Ruth Mackay – Editor’s Note 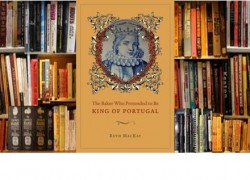 When King Sebastian of Portugal (1554-1578) was slain in battle in 1578, in Alcácer-Quibir, Morocco, he perished without a son or apparent heir, and Portugal lost her independence to Spain.

Diligences to recover the king’s remains were fruitless, which added to the uncertainty of Sebastian’s fate and the popular belief that he could have survived battle and would return to Portugal to claim his throne.

This led to Sebastianism, a collective sentiment of anticipation for Sebastian’s return which also led to the appearance of a number of imposters claiming to be the lost king.

In her book, The Baker Who Pretended to be King of Portugal, Ruth MacKay tells the story of one of the imposters, Gabriel Espinosa, and of his conspiracy to pass himself as the slain  monarch.

On August 4, 1578, in an ill-conceived attempt to wrest Morocco back from the hands of the infidel Moors, King Sebastian of Portugal led his troops to slaughter and was himself slain. Sixteen years later, King Sebastian rose again. In one of the most famous of European impostures, Gabriel de Espinosa, an ex-soldier and baker by trade—and most likely under the guidance of a distinguished Portuguese friar—appeared in a Spanish convent town passing himself off as the lost monarch.  Read more >>

Ruth MacKay works as an editor and writer at Stanford University, where she also is a visiting scholar. Her previous books are The Limits of Royal Authority: Resistance and Obedience in Seventeenth-Century Castile and “Lazy, Improvident People”: Myth and Reality in the Writing of Spanish History.