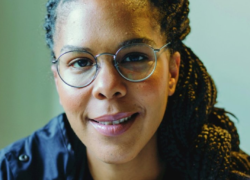 That Hair is a family album of sorts that touches upon the universal subjects of racism, feminism, colonialism, immigration, identity and memory.

“The story of my curly hair,” says Mila, the narrator of Djaimilia Pereira de Almeida’s autobiographically inspired tragicomedy, “intersects with the story of at least two countries and, by extension, the underlying story of the relations among several continents: a geopolitics.” Mila is the Luanda-born daughter of a black Angolan mother and a white Portuguese father.

She arrives in Lisbon at the tender age of three and feels like an outsider from the jump. Through the lens of young Mila’s indomitably curly hair, her story interweaves memories of childhood and adolescence, family lore spanning four generations, and present-day reflections on the internal and external tensions of a European and African identity.

In layered and luscious prose, That Hair enriches and deepens a global conversation, challenging in necessary ways our understanding of racism, feminism, and the double inheritance of colonialism, not yet fifty years removed from Angola’s independence. It’s the story of coming of age as a black woman in a nation at the edge of Europe that is also rapidly changing, of being considered an outsider in one’s own country, and the impossibility of “returning” to a homeland one doesn’t in fact know.

“It might be a commonplace to observe that colonial histories and legacies mediate lived experience, but what Djaimilia Pereira de Almeida evocatively captures with That Hair, her new work of ficto-criticism, is that it is precisely through what is often considered ‘commonplace’ or familiar that one registers those legacies and histories most consistently … de Almeida’s text both partakes in and stands outside of larger generic genealogies, as the attempt to come to terms with the existential particularities underpinning the socio-political identity of racialized postcolonial subjects often necessitates an approach that is simultaneously singular and collective in conception. This is where the brilliance of de Almeida-Mila’s loose thematic thread comes in. At the level of concept alone, there is much to appreciate in a series of anecdotes lightly clustered around an Angolan-Portuguese woman’s hair, given that hair, metonymically speaking, is often a crucial site of racial ascription, identification, and distinction. But it is Mila’s voice that truly gives the narrative a life of its own. For That Hair is narrated by an ‘I’ who understands the implications of the very act of narrating, and seems convinced that all such acts are predestined for failure … it is a testament to the strength of Mila’s voice and presence, and de Almeida’s hypnotic prowess as a writer that…episodes are so deeply impressive … In the end, this may be one of the most incredible feats of That Hair: it seems to become more engrossing the less it is grounded in immediate.” — Lori L. Tharps – The New York Times Book Reviews

Djaimilia Pereira de Almeida was born in Luanda, Angola, and grew up in Lisbon. She has a PhD in literary theory from the University of Lisbon. Her stories and essays have appeared in Granta.com, Words Without Borders, Granta Portugal, Observador, Somos Libros, Ler, serrote, and 451.

Eric M. B. Becker is the editor of Words Without Borders and a translator from the Portuguese. He has translated Mia Couto, Paulo Coelho, and Martha Batalha, among others. The book was awarded Best Translation of the Year at World Literature Today.