Book: ‘Straits: Beyond the Myth of Magellan’ by Felipe Fernandez-Armesto – Editor’s Note 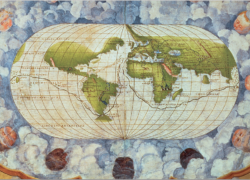 An uncompromising study of the fictions, the failures, and the real man behind the myth of Magellan.

With Straits: Beyond the Myth of Magellan, celebrated historian Felipe Fernández-Armesto subjects the surviving sources to the most meticulous scrutiny ever, providing a timely and engrossing biography of the real Ferdinand Magellan. The truth that Fernández-Armesto uncovers about Magellan’s life, his character, and the events of his ill-fated voyage offers up a stranger, darker, and even more compelling narrative than the fictional version that has been celebrated for half a millennium.

Magellan did not attempt—much less accomplish—a journey around the globe. In his lifetime he was abhorred as a traitor, reviled as a tyrant, self-condemned to destruction, and dismissed as a failure. Straits untangles the myths that made Magellan a hero and discloses the reality of the man, probing the passions and tensions that drove him to adventure and drew him to disaster. We see the mutations of his character: pride that became arrogance, daring that became recklessness, determination that became ruthlessness, romanticism that became irresponsibility, and superficial piety that became, in adversity, irrational exaltation. As the real Magellan emerges, so do his real ambitions, focused less on circumnavigating the world or cornering the global spice market than on exploiting Filipino gold. Straits is a study in failure and the paradox of Magellan’s career, showing that renown is not always a reflection of merit but often a gift and accident of circumstance.

“This is the story of a voyage that was in reality one of the most disastrous in the history of overseas exploration but which has now become one of its greatest triumphs—and of a man who failed at almost everything he set out to do and yet became one of the great heroes of modernity. Scintillating and compelling, and told with all of Felipe Fernández Armesto’s habitual verve and wit, it is at the same time a sobering insight into how we have come to conceive our own increasingly globalized world.”—Anthony Pagden, author of Worlds at War: The 2,500-Year Struggle Between East and West

“Straits is a triumph of biographical writing. With his characteristic vigor and panache, Felipe Fernández-Armesto circumnavigates Magellan’s life and times with a clearer object in mind and far greater success than ever imagined for this subject. He shows us not only the skills and bravado but also the intrigues, the self-deception, and even the insanity that animated Magellan’s quest.”—Lincoln Paine, author of The Sea and Civilization: A Maritime History of the World

“By pulling apart the usually willfully misread sources in their original languages with a detective’s eye for contradiction and inconsistency, Straits unravels a yarn of unmitigated failure punctuated by hubris, meanness, and crafty power grabs. The Ferdinand Magellan who emerges from these freshly disinterred sources is no hero but rather a ruthless gentleman of fortune who died to tell the tale.”—Kris Lane, author of Potosi: The Silver City That Changed the World

Felipe Fernández-Armesto a best-selling author, journalist and award-winning historian. The Sunday Times has called him “one of the best living historians.” He holds the William P. Reynolds Chair of Mission in Arts and Letters at the University of Notre Dame, where he is a professor in the Departments of History and Classics and the Program in the History and Philosophy of Science. His work on exploration and related subjects has won the John Carter Brown Medal, the Caird Medal of the National Maritime Museum in the UK, the Premio Nacional a Investigación of the Sociedad Geográfica Española, and the World History Association Prize (for Pathfinders: A Global History of Exploration), among other prizes. In 2017, the King of Spain awarded him the Gran Cruz de la Orden de Alfonso X el Sabio for services to education and the arts. His most recent books are Out of Our Minds and, as editor, The Oxford Illustrated History of the World.

Title: Straits: Beyond the Myth of Magellan