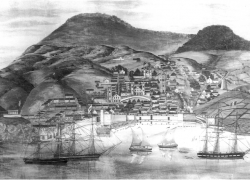 ♦  Genealogist Henrietta Mello Mayer, 82, has spent most of her adult life researching Portuguese genealogy in the Borough of Stonington, specifically the community of South of the Cannons.

This updated edition is a comprehensive chronological record tracing back, across the Atlantic to the 17th century, the origins and the history of about 200 Stonington families whose ancestors came from the Azores islands in the 1840s.

The new book offers additional genealogical research and material documenting the Portuguese presence in the Borough of Stonington. It includes previously unpublished family and census records; research on the compiler’s Azorean ancestors; and many photographs, some never published before.

According to Mayer, the phrase “South of the Cannons” designated Stonington’s most concentrated Portuguese neighborhood. The designation appeared after two cannons used in the War of 1812 were permanently placed in a little square, subsequently called “Cannon Square,” in 1876.

Of Azorean descent herself, Mayer was born on Omega Street, the southern portion of Stonington Borough, the community she grew up in and writes about when it was still largely a Portuguese neighborhood. Of this community made up of families almost all from the Azores Islands, she recalls:

“The Yankees to the north might once have regarded the area south of cannons as exotic or even a little unfriendly, but for those who lived there and their descendants, ‘South of the Cannons’ has always denoted a warm, tightly knit community, a token of good, if hardscrabble, old days.”

Those were the days when the lure to cross the sea was powerful and whaling ships passing through the Azorean islands of Pico and Faial trapped many young men with false promises of good wages. Disillusioned, Azorean whalers often jumped ship to find better paying shore work at various ports of call in America.

Many of them eventually settled in the whaling communities of New England where they later were joined by their young brides from the islands. They started families, forming tight-knit Azorean communities. This new stream of immigrants brought with them the Azorean traditions of farming, feasts and family to communities such as South of the Cannons, the culmination of Mayer’s work.

Mayer retrieved much of her data primarily from the town halls of Stonington and New London and from the New Bedford Public Library. She also researched the Stonington Mirror, Stonington’s newspaper in the late 1800s.

The records also include chronologies of births, deaths, marriages, and other registers of the various Portuguese individuals living in these areas at the time.

Copies of the book are available through the Stonington Historical Society. The book costs $25 and proceeds benefit the historical society.