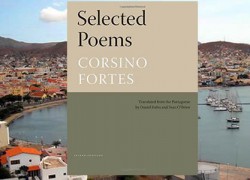 Concerned with giving voice to Cape Verdean life, Fortes writes in Cape Verdean Creole – and not just standard Portuguese – a powerful statement reinforcing the islands’ distinctive African nature. However, his poems are often written from the perspective of an exile – and themes of exile and redemptive return recur in his work. This collection introduces English readers to Fortes, and the poet’s beautiful and unique use of language. Though not overtly political, the images in these poems reverberate with approaching renewal – drums surround the island, dead caravels await revival, children scatter seeds near the quiet strings of instruments. Growing out of a Modernist tradition yet composing with a distinctly singular vision, Fortes excavates the gut, heart, and mind, giving us vivid and often hallucinatory glimpses of the land, sea, and people of Cape Verde. His poems become earth-and word-scapes rooted in the land and the body. This first substantial English-language collection, selected and evocatively interpreted by Sean O’Brien and Daniel Hahn, pulls from Fortes’ entire body of work.

About the Author
Corsino Fortes is a poet and a diplomat. Born on the Cape Verdean island of São Vicente in 1933, his early work appeared

in Claridade (Clarity), a journal that defined Cape Verdean literary identity from the later 1930s to 1960. Fortes’ first full poetry collection Pão & Fonema (Bread & Phoneme) was published in 1974. In 1986 he published Árvore e Tambor (Tree and Drum). He finished what he had long seen as a trilogy in 2001 with Pedras de Sol & Substância which was collected with the previous two books under the title A Cabeça Calva de Deus (The Bald Head of God). The poet’s use of Cape Verdean Creole – and not just standard Portuguese – is a powerful statement reinforcing the idea of the islands’ distinctive African nature. Fortes studied in Portugal and spent much of his life abroad on diplomatic service – most notably in Angola and Lisbon.