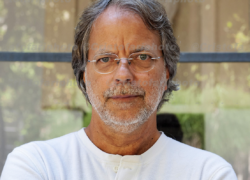 Known internationally for his novels, Neustadt Prize-winner Mia Couto first became famous for his short stories. Sea Loves Me includes sixty-four of his best, thirty-six of which appear in English for the first time. Covering the entire arc of Couto’s career, this collection displays the Mozambican author’s inventiveness, sensitivity, and social range with greater richness than any previous collection―from early stories that reflect the harshness of life under Portuguese colonialism; to magical tales of rural Africa; to contemporary fables of the fluidity of race and gender, environmental disaster, and the clash between the countryside and the city. The title novella, long acclaimed as one of Couto’s best works but never before available in English, caps this collection with the lyrical story of a search for a lost father that leads unexpectedly to love.

“Couto employs his haunting lyricism … to examine the burdens of race, history, and culture in the aftermath of Mozambique’s 1974 independence from Portugal … Mia Couto’s multivalent vision also manifests in the seamless merging of author and translators, original and translated texts … Like Mia Couto’s aesthetic effort to render whole the many facets of his contradictory identity, the translators’ linguistic dance simultaneously pays homage to his original fiction and gives birth to its autonomous and indelible existence in English.” ―Asymptote

“These literary fragments are dreamy but hopeful responses to Mozambique’s violent past, magical tales that find solace in the wisdom of rivers and trees, fishermen and fortune tellers, children and blind men… Couto’s stories are rooted yet timeless, both whimsical and deeply spiritual.”―Vanity Fair

“[Couto is] a brilliant aphorist. There are countless sentences that … have the weight and wisdom of ancient proverbs.” ―Wall Street Journal

Mia Couto was born in Beira, Mozambique, where he directed the Mozambican state news agency during the years following independence from Portugal. Since the late 1980s, he has worked as an environmental biologist and a writer. Couto is the author of more than thirty books, which have been published in thirty-five countries. He has won major literary prizes in Mozambique, Zimbabwe, Portugal, Brazil., Italy and the United States, including the 2013 Camōes Prize and the 2014 Neustadt International Prize for Literature. He was a finalist for the 2015 Man Booker International Prize and the 2017 International Dublin Literary Award. Mia Couto lives with his family in Maputo, Mozambique, where he works as an environmental consultant.

David Brookshaw’s many translations include Mia Couto’s recent novels Woman of the Ashes and The Sword and the Spear, as well as earlier Couto novels such as The Tuner of Silences, Sleepwalking Land, and Under the Frangipani. He has translated widely from the literatures of Lusophone Asia and the Azores Islands. Brookshaw is Professor Emeritus of Lusophone Studies at the University of Bristol, England.

Eric M. B. Becker is the recipient of a PEN Heim Award, a Fulbright Fellowship and a Fellowship from the National Endowment for the Arts. In 2019, he earned honorable mention from the Aldo and Jeanne Scaglione Prize for his translation of Mia Couto’s Rain and Other Stories. He has translated works by, among others, the Brazilian writers Lygia Fagundes Telles and Fernanda Torres and the Angolan-Portuguese writer