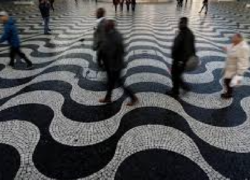 April 1941: After fleeing wartime France, 17-year-old Claire arrives at Rossio train station in Lisbon. She immediately crosses paths – in the most inauspicious of ways – with Antonio, a young Portuguese waiter, aspiring artist and, when necessary, pickpocket.

The Chave d’Ouro café where Antonio works is a hotspot for the plotters and spies flocking to the Portuguese capital during WWII, and he soon becomes involved in a risky anti-Nazi sabotage operation. While Claire waits in vain for her family and the ship they are supposed to take to the United States, she begins a search for two refugee children who were separated by force from their parents – and who carry a dangerous secret.

Antonio, shocked by the murder of a German refugee who had become his friend, sets out to discover who was responsible. Their investigations – and their lives – intertwine as they discover that the disappearances are linked to something the Germans are desperately seeking in Lisbon. In a city filled with intrigue and betrayal, having it in one’s possession could be deadly. But having to decide between duty and a love that could be is even worse.

“Through her compelling characters and deft storytelling, Jeannine Johnson Maia takes the reader into the suspenseful and dangerous world of Lisbon 1941, when the city served as an escape route for Jews and others fleeing the Nazis and the Second World War.”

-Richard Zimler, The Last Kabbalist of Lisbon and The Gospel According to Lazarus

“Jeannine Johnson Maia’s novel is a breath of fresh air on a theme that is never exhausted. I read it from beginning to end, hardly putting it down. (…) Through a fictional account, this book transports us back to a Lisbon in turmoil, full of spies on both sides, the capital city of a provincial country that suddenly finds itself invaded by tens of thousands of people fleeing the Nazis who look to the United States, the destination of most refugees, as a new promised land. This is a Lisbon with few available rooms, but still space for a love story between two young people.” -César Santos Silva, author of Antonio, the Other Salazar

“World War Two Lisbon was a hub of intrigue. Spies, refugees, Nazis, disappearances, and a murder affect the lives of two young people, Claire and Antonio, trying to survive in the city. This carefully researched, well-written, engaging historical novel tells a wonderful story set in this difficult time and place.”

Jeannine Johnson Maia, before moving to Portugal, worked as a journalist in Belgium and Washington, DC. She served as a press specialist at the U.S. Mission to the European Union in Brussels; studied in the United States and Italy; taught English in France; and lived in Cape Verde. She now lives in Porto, a city she finds irresistibly photogenic. ‘Rossio Square N.°59’ – which was published by Casa das Letras (LeYa) in Portuguese under the title ‘Praça do Rossio, N.°59’ – is her first novel.