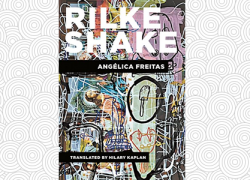 Rilke Shake’s title, a pun on milkshake, means in Portuguese just what it does in English. With frenetic humor and linguistic innovation, the Brazilian poet Angélica Freitas constructs a temple of delight to celebrate her own literary canon. In this whirlwind debut collection, first published in Portuguese in 2007, Gertrude Stein passes gas in her bathtub, a sushi chef cries tears of Suntory Whisky, and Ezra Pound is kept “insane in a cage in pisa.”

Founded nine years ago, the translation awards are presented by “Three Percent”, an online resource for international literature. “Three Percent” is based at the University of Rochester and takes its name from the estimated percentage of books published annually in the U.S. that are works in translation.

Hilary Kaplan‘s translations of Brazilian poetry and fiction have been featured in Modern Poetry in Translation, PEN America, and on BBC Radio 4. Her writing on Brazilian poetry and poetics appears in eLyra, Jacket2, Rascunho, and the collection Deslocamentos Críticos. She holds an M.F.A. from San Francisco State University. She received a 2011 PEN Translation Fund grant for her translation of Rilke Shake. Kaplan lives in Los Angeles.