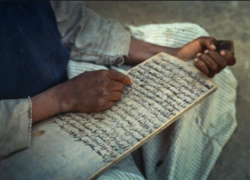 When Guinean Muslims leave their homeland, they encounter radically new versions of Islam and new approaches to religion more generally. In Remaking Islam in African Portugal, Michelle C. Johnson explores the religious lives of these migrants in the context of diaspora. Since Islam arrived in West Africa centuries ago, Muslims in this region have long conflated ethnicity and Islam, such that to be Mandinga or Fula is also to be Muslim. But as they increasingly encounter Muslims not from Africa, as well as other ways of being Muslim, they must question and revise their understanding of “proper” Muslim belief and practice. Many men, in particular, begin to separate African custom from global Islam.

Johnson maintains that this cultural intersection is highly gendered as she shows how Guinean Muslim men in Lisbon―especially those who can read Arabic, have made the pilgrimage to Mecca, and attend Friday prayer at Lisbon’s central mosque―aspire to be cosmopolitan Muslims. By contrast, Guinean women―many of whom never studied the Qur’an, do not read Arabic, and feel excluded from the mosque―remain more comfortably rooted in African custom. In response, these women have created a “culture club” as an alternative Muslim space where they can celebrate life course rituals and Muslim holidays on their own terms. Remaking Islam in African Portugal highlights what being Muslim means in urban Europe and how Guinean migrants’ relationships to their ritual practices must change as they remake themselves and their religion.

Resonant throughout Remaking Islam in African Portugal, the ethnographer’s deeply informed voice is the one we ourselves need to hear, as we, too, face unprecedented, once hardly imaginable predicaments of closeness and distancing in our troubled times. With the benefit of fieldwork over decades across town and country in Guinea-Bissau and in Portugal’s capital, Lisbon, and speaking with great intimacy among immigrant Muslim diasporics, Michelle Johnson asks and answers the salient question. How do originally rural African diasporics in a European capital city navigate their unprecedented predicaments meaningfully through the controversial, tentative and yet, with great passion, intentionally faithful re-creation of Islam in the midst of complex, puzzling and unexpected cultural and social diversity? Outstanding, in my view as an ethnographer of divination, is Johnson’s chapter on ‘Reversals of Fortune,’ in which she explores the surprising ambiguities and uncertainties in the quest for explanation of suffering and for healing with Muslim and non-Muslim consultants as diviners and healers. — Richard Werbner

Michelle C. Johnson is a cultural anthropologist who specializes in religion and ritual in West Africa and among African immigrants in Europe. She has conducted extensive fieldwork with Muslims in Guinea-Bissau and with Guinean Muslim immigrants in Lisbon, Portugal. She has held grants from the Social Science Research Council, the Department of Education (Fulbright-Hays), and the Woodrow Wilson Foundation and has authored numerous articles and book chapters, including “‘Never Forget Where You’re From’: Raising Guinean Muslim Babies in Portugal” in A World of Babies: Imagined Childcare Guides for Eight Societies and “‘Nothing Is Sweet in My Mouth’: Food, Identity, and Religion in African Portugal.” She is Professor of Anthropology in the Department of Sociology and Anthropology at Bucknell University. She was awarded the 2019 Class of 1956 Lectureship for Inspirational Te