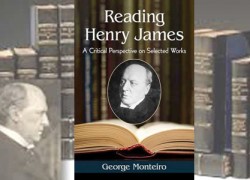 Reading Henry James: A Critical Perspective on Selected Works, looks to allusions, sources, echoes and affinities in the author’s vast body of work as critical ways to discover and interpret his artistic purposes and literary intentions. It ranges over the vast corpus of his fiction, including stories, novelas and novels published in the leading journals of the day on both sides of the Atlantic. The considerations in individual chapters range from close analysis of Daisy Miller, The American, The Beast in the Jungle and The Wings of the Dove to James’s creative fascination with the very successful literary career as well as the everyday life of the social animal who was the poet Robert Browning to James’s complex but productive relationship with his Cambridge friends Marian “Clover” Adams and her husband, the historian and autobiographer Henry Adams.

George Monteiro, professor emeritus of English and of Portuguese and Brazilian Studies at Brown University, is the author or editor of books on Henry James, Henry Adams, Robert Frost, Stephen Crane, Emily Dickinson, Fernando Pessoa, and Luis de Camões, among others. He served as Fulbright lecturer in American Literature in Brazil–São Paulo and Bahia–Ecuador and Argentina; and as Visiting Professor in UFMG in Belo Horizonte. In 2007 he served as Helio and Amelia Pedroso / Luso-American Foundation Professor of Portuguese, University of Massachusetts Dartmouth. Among his recent books are Stephen Crane’s Blue Badge of Courage, Fernando Pessoa and Nineteenth-Century Anglo-American Literature, The Presence of Pessoa, The Presence of Camões, Conversations with Elizabeth Bishop, Critical Essays on Ernest Hemingway’s A Farewell to Arms, Fernando Pessoa and Nineteen-Century Anglo-American Literature and Elizabeth Bishop in Brazil and After: A poetic Career Transformed. Among his translations are Iberian Poems by Miguel Torga, A Man Smiles at Death with Half a Face by José Rodrigues Miguéis, Self-Analysis and Thirty Other Poems by Fernando Pessoa, and In Crete, with the Minotaur, and Other Poems by Jorge de Sena. He has published collections of poems, The Coffee Exchange and Double Weaver’s Knot and most recently The Pessoa Chronicles 1980-2016 and 38 School Street: A Memoir. More…