Book |Postcolonial People: The Return from Africa and the Remaking of Portugal| by Christoph Kalter – Editor’s Note 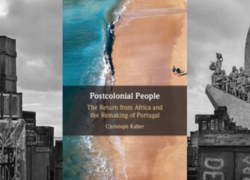 Christoph Kalter examines how European nations were remade by the end of empire, through the history of ‘returning’ settlers from Portuguese Africa.

Having built much of their wealth, power, and identities on imperial expansion, how did the Portuguese and, by extension, Europeans deal with the end of empire? Postcolonial People explores the processes and consequences of decolonization through the histories of over half a million Portuguese settlers who ‘returned’ following the 1974 Carnation Revolution from Angola, Mozambique, and other parts of Portugal’s crumbling empire to their country of origin and citizenship, itself undergoing significant upheaval. Looking comprehensively at the returnees’ history and memory for the first time, this book contributes to debates about colonial racism and its afterlives. It studies migration, ‘refugeeness,’ and integration to expose an apparent paradox: The end of empire and the return migrations it triggered belong to a global history of the twentieth century and are shaped by transnational dynamics. However, they have done nothing to dethrone the primacy of the nation-state. If anything, they have reinforced it.

‘Decolonization not only changed the map of the world, but also had deep repercussions on European societies. Surely the definitive study of the half-million retornados coming to Portugal at empire’s end in 1975, Postcolonial People makes a fascinating contribution to the history of migration, of public memory, and of postcolonial Europe.’ — Sebastian Conrad, Free University of Berlin

‘Postcolonial People provides a pathbreaking account of Europe’s last major decolonization, focusing on the retornados who migrated to the Portuguese metropole. Kalter’s study mines the productive space created by gaps between protagonists’ understandings of their experiences and legal categories such as refugee and citizen. In lively and accessible prose, Kalter demonstrates how transnational processes of migration from Portugal’s former colonies and international humanitarian responses paradoxically worked to entrench notions of the nation, even as they transformed the very meanings and borders of that national community. Wide-ranging, meticulously researched, comparatively informed, and conceptually sharp, Postcolonial People breaks new ground in its analysis of how the simultaneous end of empire and authoritarian rule in Portugal reconfigured what it meant to be Portuguese in legal and socio-cultural terms.’ — Pamela Ballinger, University of Michigan

‘This is an original and pathbreaking work, empirically solid and analytically sophisticated. It corrects several unsubstantiated historiographical and public claims, offering a compelling assessment of the massive immigration from the former Portuguese colonies in Africa as a consequence of the interrelated dynamics of democratization, after the Revolução dos Cravos of 1974, and formal decolonization. Moreover, it contributes to a richer study of European trajectories of decolonization and their multifaceted and enduring effects.’ — Miguel Bandeira Jerónimo, University of Coimbra

Christoph Kalter is an Assistant Professor at the Center for Global History at the Freie Universität Berlin. He received his PhD in Modern History from the same university in 2010. His research concentrates on decolonization after 1945 and the postcolonial societies of Europe, especially France and Portugal. His first book was published by Cambridge UP in 2016 (originally published in German in 2011). Entitled ‘The Discovery of the Third World: Decolonization and the Rise of the New Left in France, c. 1950-1976,’ it deals with the interconnection between the rise of the concept of the “Third World” and that of a new radical left in France.  Currently, Christoph Kalter is pursuing his interest in postcolonial Europe in a second book-length project, entitled ‘Postcolonial People. Migration and Decolonization in Portugal, c. 1974-2014,’ which addresses the history of decolonization in the metropole through a focus on the so-called retornados.

Title: Postcolonial People:The Return from Africa and the Remaking of Portugal