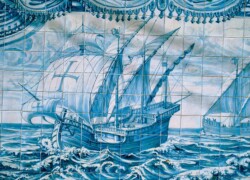 Villamar examines the role of Portuguese merchants in the formation of the Manila Galleon as a system of trade founded at the end of the sixteenth century.

The rise of Manila as a crucial transshipment port was not a spontaneous incident. Instead, it came about through a complex combination of circumstances and interconnections that nurtured the establishment of the Manila Galleon system, a trading mechanism that lasted two and half centuries from 1565 until 1815. Villamar analyses the establishment of the regulatory framework of the trade across the Pacific Ocean as a whole setting that provided legality to the transactions, predictability to the transportation and security to the stakeholders.

He looks both at the Spanish crown strategy in Asia, and the emergence of a network of Portuguese merchants located in Manila and active in the long-distance trade. This informal community of merchants participated from the inception of the trading system across the Pacific, with connections between Europe, ports in Asia under the control of Portugal, the Spanish colonies in America, and the city of Manila. From its inception, the newly-founded capital of the Philippines became a hub of connections, attracting part of the trade that already existed in Asia. Surveying the Portuguese commercial networks from the ‘Estado da Índia’ across the ‘Spanish lake,’ this book sheds light on the early modern globalization from a truly comprehensive Iberian perspective.

This is a valuable resource for scholars of Pacific and Iberian trade history and the maritime history of Asia.

Cuauhtémoc Villamar is a retired career diplomat who served in the Mexican Foreign Service for three decades, primarily in Asia. He was posted in China twice, Singapore, Thailand, and Canada, specialising in economic and cultural promotion as well as in technical cooperation. He has a PhD in History from the National University of Singapore.