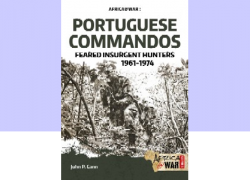 It is well established that these warriors were responsible for the elimination of more insurgents and capturing more of their weapons than any other force during the war. Great pains were taken to stay abreast of the latest enemy operational methods and maintain the ‘warrior edge’ in the force. This edge, in essence, was an approach to fighting that pushed the commandos always to think of themselves as the hunter rather than the hunted.

Officers returning from contact with the enemy were rigorously debriefed, and commando instructors regularly participated in operations to learn of the latest enemy developments. This information was integrated with intelligence from other sources gathered by the military and national intelligence services, and from this current knowledge, training was constantly revised to remain attuned to the enemy and his behavior. The commandos became a breed apart — and their reputation was such that when insurgents discovered a unit deployed into their area, they would generally withdraw until the killers left. This commando training — and its sympathy with the fighting environment — made the commandos the most effective ground force in the Portuguese Army.

The commandos were expert practitioners in the art of counterinsurgency, and their practice of destroying the enemy in great numbers quickly and quietly served as inspiration not only to South Africa and Rhodesia, but to the enemy himself. This is the story of the Portuguese commandos: their beginnings, their unique operations and their legacy and influence in subsequent sister units such as the Buffalo Battalion of South Africa.

John P. Cann is an Adjunct Research Staff Member at the Institute for Defense Analyses, a former Scholar-in-

Residence at the University of Virginia, and the retired Professor of National Security Studies at Marine Corps University. He earned his doctorate in the Department of War Studies at King’s College, University of London, in 1996 and subsequently published Counterinsurgency in Africa: The Portuguese Way of War, 1961-1974 and Brown Waters of Africa: Portuguese Riverine Warfare, 1961-1974. He is likewise the author of The Flechas – Insurgent Hunting in Eastern Angola 1965-1974 and some thirty articles on conflict in Africa.
Cann is a retired naval captain and flight officer specializing in open-ocean-reconnaissance aviation with a variety of aviation assignments, including command. He also served on the staffs of the Chief of Naval Operations and the Secretary of Defense and was awarded the Portuguese Medal of Dom Afonso Henriques and the Portuguese Navy Cross Medal. He is an Associate Member of the Portuguese Academia de Marinha.