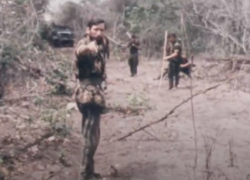 Portugal fought a bush war in Mozambique — one of the most beautiful countries in the world — for over a decade. The small European nation was ranged against formidable odds and in the end was unable to muster the resources required to effectively take on the might of the Soviet Union and its collaborators — every single communist country on the planet and almost all of sub-Saharan Africa. Yet, Al Venter argues, Portugal did not actually lose the war, and indeed fought in difficult terrain with a good degree of success over an extended period. It was radical domestic politics that heralded the end.

Mozambique is once again embroiled in a guerrilla war, this time against a large force of Islamic militants, many from Somalia and some Arab countries, and unequivocally backed by Islamic State and the lessons of Mozambique’s bush war are still relevant today.

Al J. Venter is a specialist military writer and has had 50 books published. He started his career with Geneva’s Interavia Group, then owners of International Defence Review, to cover military developments in the Middle East and Africa. Venter has been writing on these and related issues such as guerrilla warfare, insurgency, the Middle East and conflict in general for half a century. He was involved with Jane’s Information Group for more than 30 years and was a stringer for the BBC, NBC News (New York) as well as London’s Daily Express and Sunday Express. He branched into television work in the early 1980s and produced more than 100 documentaries, many of which were internationally flighted. His one-hour film, ‘Africa’s Killing Fields’ (on the Ugandan civil war), was shown nationwide in the United States on the PBS network. Other films include an hour-long program on the fifth anniversary of the Soviet invasion of Afghanistan, as well as ‘AIDS: The African Connection’, nominated for China’s Pink Magnolia Award. His last major book was Portugal’s Guerrilla Wars in Africa, nominated in 2013 for New York’s Arthur Goodzeit military history book award. It has gone into three editions, including translation into Portuguese.