Book: Popular Art From the Heart of Portugal – Review 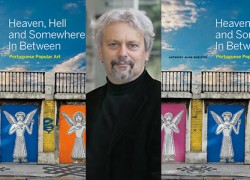 What a fascinating read and visual feast is anthropologist Anthony Alan Shelton’s Heaven, Hell and Somewhere In Between, an exquisite photo album and collection of essays on Portuguese popular art. The book is a companion piece for the 2015 major exhibition curated by Shelton at the University of British Columbia’s Museum of Anthropology in Vancouver where he is the director and a leading voice in museology, cultural criticism, and the anthropology of art and aesthetics.

Heaven, Hell and Somewhere In Between is an elegant art book with meat on its bones, a delicious plate-full like a great Portuguese meal. It is also a cluster of stories about the makers of Portuguese popular art and a series of multifaceted dialogues with Portugal’s history and cultural identity that required years of meticulous research, visits, and interviews. The casual page-turner might gloss over the highly informed 10 thematic essays connecting the book’s three-part structure, but this would be a loss. Shelton tackles the complexity of popular art, resisting facile categories and reduced notions that diminish its value and distract the viewer from a fresh consideration. “You can’t understand Portuguese popular art without understanding its cultural configuration and also the political force that created and sustained it for nearly 50 years,” says Shelton. His rich interpretative analysis provides the summaries and details essential to that appreciation.

Striking photos of more than eighty art pieces are on display: statues, masks, paintings, murals, icons, tiles, and costumes along with the people who create them. These visuals inform and are informed by essays in dialogues with such evoking titles as ‘The Kingdom of the Marvellous’ (an intriguing portrait of popular artist David Gomes and his work), ‘Portuguese Demonology: The Representation of Evil and Sin,’ and ‘A Melancholy History of Portuguese Museums.’ Drawing from a multitude of sources, Shelton offers his unique overview of the primary forces shaping the evolution of Portuguese popular art while also commenting on key pieces from the recently acquired Museum of Anthropology collection. 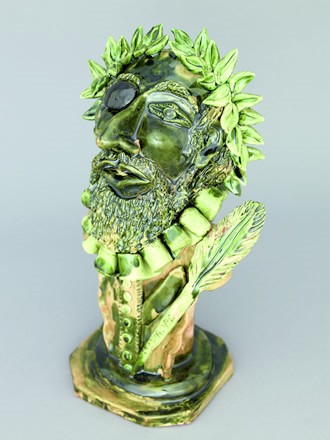 Heaven, Hell and Somewhere In Between is highly accessible for all readers and particularly rich for aficionados of popular art and all things Portuguese. As the European continent’s most westerly margin, Portugal is the country with the oldest unchanging border. Still, for many, its culture and history remain unfamiliar. At moments lyrical, Shelton makes intimate contact in his description of Portugal as “A republic of fables, a nation nestled in dreams, marvels, even miracles.” He explores the Luso imagination from various perspectives while defending a contemporary contextualization of popular art: “The book approaches Portuguese culture, sensibilities, histories, if you like, from the perspective of popular art. This is very different from most books on popular art.” Further, he distinguishes this view from the traditional 19th century German Romantic vision that interprets popular art primarily through the lens of national identity. Rather, Shelton insists, “popular art does not blandly reflect the forces that produce it but mediates them through its own specific visual strategies and technologies.” Mediation is an essential distinction for the author-curator-anthropologist-professor who views popular art in a historical and social continuum.

According to Shelton, it is “the specific social, political and cultural conditions underlying the different contexts in which (it) is produced.” He is quick to point out that Portugal’s dictatorship under the Estado Novo regime from 1924 to 1974 was, ironically, responsible for a renaissance in popular art that is still evident today. The regime encouraged popular art as integral to its promotion of national identity. Its ten-point plan aimed to “…restore Portugal to its historical grandeur, in its plenitude to spread its universalist civilization to its vast empire. It will return Portugal to be one of the major spiritual powers of the world.”

The Estado Novo’s vision abstained from contradictions. One of its hallmarks was an idyllic and harmonious image of rural life that contrasted sharply with the realities of poverty, illiteracy, and exploitation. António Salazar, the president of the dictatorial regime, famously characterized the Portuguese as “a people of gentle manners” (povo de brandos costumes). In union with the Catholic Church, the government repressed many of the popular traditional pilgrimages (romarias) sponsored by secular brotherhoods that connected the population’s spirituality to Greek and Roman deities. For hundreds of years, feasts at the climax of such pilgrimages were occasions for rural markets, entertainment, and diversions that the 20th century church and state sought to control.

In exchange, “The Estado Novo encouraged an expression of Portuguese identity (Everyman’s art) disengaged from religion within a project of forging an image of national identity. Some artists used this encouragement to criticize (indirectly) Portuguese society and government.”. Irony and re-figuration is part of the period’s lasting heritage as demonstrated by Shelton in popular statuary, masks, parade costumes, and murals. In the author’s opinion, as the regime reinvented a myth of Portuguese culture it reinvented a representative folklore to accompany it, thus allowing popular art to play a role in justifying the dictatorship’s project of national identity (and suppressing anything that did not fit within that definition).

Saudade, That Famous Iteration of Portuguese-essence

Heaven, Hell and Somewhere In Between opens with a visit to popular artist David Gomes’s shop in Braga. Gomes began creating popular art objects on April 25th, 1974, the day Portugal revolted against its authoritarian regime in what is now called the Carnation 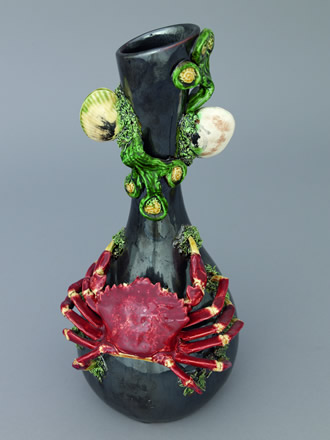 Revolution. Shelton walks us through the shop on Rua do Anjo, showing us here a refigured Christ on a cross, there re-purposed shrines, brightly painted saints, and the ‘Salazar’s hat figure,’ now part of the Museum of Anthropology collection. Wandering among the pieces, we hear the story of his first meeting with Gomes and the growing fascination with the maker of such unique popular art. “His pieces are neither copies nor commissions but made from his memories and imaginings of things he has seen or read. His mind mediates the experience (…) to produce something new and unique that can never be duplicated.” As we tour the work, Gomes becomes an emblematic figure of what Shelton admires greatly in Portuguese popular art. “…Blind imagination assembles and reassembles and reinvents in different forms over and over again our understanding of ourselves within the world and our sense of the present and past.”

Saudade is mentioned often in Shelton’s book. Perhaps Gomes shop is that very state of being and sensing so often evoked when referring to the Portuguese soul, a nostalgia or longing, immaterial yet visceral. It is the definition of one’s emotional relationship to time itself and the waiting for the return of a forgotten age. A popular artist such as Gomes gives life to saudade when he “Invents new idioms and object poems that preserve and transmit the hidden truths and heartfelt realities which he protects from the present’s galloping history.” The works we view are anachronistic, playful, strange, and intriguing. Gomes’s shop, the dusty storefront that drew in as if by enchantment as he passed one day, is now closed. Its contents have been sold to a collector in a neighboring town, but saudade, perhaps that ‘Somewhere in Between’ evoked in the title, is omnipresent in this rich book on popular art. Surely it is present in the many fine pieces now part of the UBC Museum of Anthropology collection.

I asked Anthony Shelton what he thought saudade might look like if it was a popular art figuration: “…Perhaps the countless ruins that straggle the country…I don’t think saudade has form, it is something inhered in nature and villages; sea mists and dampness, verdant green mosses…a cinema of memories in which tragedy does not provoke outrage or egoistic self-righteousness but surrender to the complexity of life as sweet and piquant; enchanting and dower; adventurous but repetitive; hard and cleansing because of all this….”

Of Dystopia and the Future of Popular Art

What about Portuguese popular art now and in a future characterized by economic austerity, the omnipresence of mass culture, and disenchantment with Europe’s promise of a rich and united family? How does the popular artist mediate and articulate such a moment? Shelton aptly points out that techniques, styles, and types of objects, materials, media, and uses change all the time. “There is currently a proliferation of wall murals in Portugal and some makers are using electronics and repurposing mass produced articles to create jewelry and decorative objects.” Four floors of an abandoned building in Lisbon are covered with an enormous mural of a crocodile titled ‘The Tear of a Crocodile Before it Swallows a Sardine.’ Another mural depicts German Chancellor Angela Merkel as the puppeteer manipulating Portuguese politician-puppets. Zé Povinho, the iconic image of the Portuguese Everyman, is crucified in a ceramic shrine tableau. Icons such as a devil playing the guitar, saints, the Virgin Mary, and the Barcelos rooster are re-imagined by new generations of popular artists.

Some of these figurines are exhibited in the chapter called ‘Saints and Their Makers’ that also describes the work of the remarkable potter Rosa Ramalho whose influence continues in contemporary pieces created by her great-grandson António Ramalho. The chapter titled ‘Creation and Apocalypse’ links contemporary murals with azulejos (traditional blue ceramic tile) and ‘creation’ paintings from the 16th century. “Murals and graffiti demand no response, recognition or understanding,” writes Shelton. “They destabilize social categories by denying dialogical engagement. With its gleaming wall of azulejos and crumbling spray-painted facades, Portugal can sometimes feel caught between the desire for destiny and the promise of nothing.”

Portugal struggles today for political and social stability in a reality that is post-Estado Novo/Carnation Revolution/European Union Utopia. As it does so, its popular art makers continue to shape, color, and imagine their mediations of that experience. Anthony Shelton observes such production with an eye on both the past and present. “Popular art will continue to change, but we shouldn’t forget what has gone before or underestimate the sacrifices and achievements artists have had to make to continue their craft…”

A wonderful selection of the Portuguese popular art discussed in Heaven, Hell and Somewhere In Between is now at home with the stunning North West Coast First Nation Totem poles at the Museum of Anthropology in Vancouver. It all belongs together, according to its director Anthony Shelton. He deplores that “ethnography, anthropology museums and world culture museums always seem to ignore Western material and visual culture, thereby rendering European and North American culture invisible.” He is proud that the Portuguese acquisitions augment the ‘European coverage’ of the Museum of Anthropology’s ‘European coverage’ that possesses a collection that is “probably the largest now in North America.” Heaven, Hell and Somewhere In Between, adds an elegant and brilliant volume to a world of popular art from the heart of Portugal. 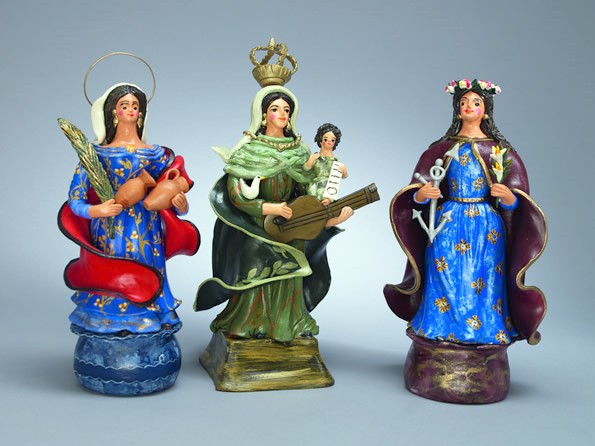 Author’s note: – All quotes are from an interview with Anthony Shelton and the text of Heaven, Hell and Somewhere In Between, Anthony Alan Shelton.