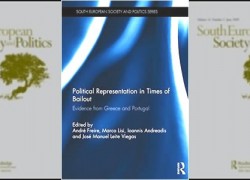 Since 2008 many European states have experienced significant challenges in adapting to austerity, and political actors within these states have made significant changes in their discourses and practices. This book explores the short-term impact of the sovereign debt crisis on aspects of political representation in Greece and Portugal, two of the countries that have been the most severely affected. It provides the most systematic examination to date of the attitudinal change of voters and elites regarding participation and representation, and of the legitimacy of the political system in two of the bailed-out Eurozone states. By examining the congruence between elites and voters, the shift in the patterns of competition, and the position of both citizens and representatives on the main issues, the studies contribute towards a reassessment of the validity of the responsible party model and of theories about democratic accountability. By relying on original mass and elite surveys conducted both before and after the bailouts, the volume helps us understand how the EU/IMF intervention has affected partisan alignments in Greece and Portugal, as well as the differences and similarities in the way political elites and civil society have adapted to severe austerity. This book was originally published as a special issue of South European Society & Politics.

Marco Lisi is an Assistant Professor in the Department of Political Studies at the Universidade Nova of Lisbon, Portugal. He holds a PhD in Political Science from the University of Florence, Italy. His main research interests are political parties, party systems, electoral behavior, political campaigns and democratic theory.

Ioannis Andreadis is an Assistant Professor at the Aristotle University of Thessaloniki, Greece. Until May 2014 he was a Fulbright Visiting Scholar at the University of Michigan, USA, working on the project: “Establishing the Hellenic (Greek) National Election Studies”. He is a member of the ECPR steering committee of the standing group on public opinion and voting behavior in a comparative perspective and the comparative candidate survey, a specialist on political web surveys, and leader of the WebDataNet Task Force: Web Survey Paradata.

José Manuel Leite Viegas is an Associate Professor of Political Sociology at ISCTE-IUL (Instituto Superior de Ciências do Trabalho e da Empresa – Instituto Universitário de Lisboa), Portugal, where he is currently director of the Department of Political Science and Public Policies. He was founder and president of CIES-ISCTE (Centre for Studies and Research in Sociology), where he is now a senior researcher.