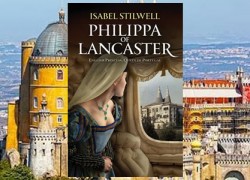 Philippa of Lancaster died of the plague on July 15, 1415, at the age of 55. Ten days later, a fleet of 240 boats and an army of 20,000 men left Lisbon. With them sailed three of her sons: the heir to the throne, Duarte; infante Henrique (later known as the Navigator); and Pedro. The fortified city of Ceuta fell into Portuguese hands a month later. Queen Philippa would expect nothing less from her sons. A woman of unwavering faith, known for her generosity and strong will, she was determined to change the Portuguese court, so different from the one she had grown up in. Philippa gave birth to her first child when she was 28 years old. That was the beginning of the Ínclita Geração, the “Illustrious Generation”, which would one day sail away in search of new worlds, forever changing the destiny of Portugal, and of the world. Friar John, her tutor, had foreseen her future in the stars. The first daughter of John of Gaunt and Blanche of Lancaster, granddaughter of the great Edward III, she left behind her beloved England to marry the Portuguese King João I. On February 11, 1387, the people of Porto filled the streets of the city to enthusiastically acclaim Filipa de Lencastre, Queen of Portugal. In this historical novel, based on a careful historical research, the bestseller author Isabel Stilwell tells us the story of one of Portugal’s most important queens. From her childhood in England, where we get to know the fourteen-century’s court, to her arrival by boat in Galiza, we are taken on a journey of love and enmity, adventure and intrigue. Originally published in a Portuguese edition, in April 2007, Filipa de Lencastre – A Rainha Que Mudou Portugal has had 5 reprints and sold more than 50,000 copies.

About the Author
Isabel Stilwell is a Portuguese journalist and writer. Her great passion for historical novels

became apparent in 2007 with D. Filipa de Lancaster, the Portuguese original of the English edition being presented here, which was followed by D. Catarina de Bragança and D. Amélia, with growing success. In April 2012, it was the turn of D. Maria II, which received a special edition for the Brazilian market. October 2013 launched Ínclita Geração.
From the Diário de Notícias, where she started at 21, she has made an essential contribution to Portuguese journalism. She founded and directed the magazine Pais & Filhos, was the editor of the magazine Notícias Magazine for 13 years and editor of the newspaper Destak. Presently she writes a current affairs chronicle, every Saturday, for the Jornal i.
Writes also for the magazine Máxima, and one of her pieces on the adoption in Portugal (“They do not love or let love”, together with journalist Carla Marina Mendes) was awarded the 1st Journalist Award “The Rights of the Child in the News’.
She continues to collaborate every month with the magazine Pais e Filhos and when she is not writing, she daily turns the Dias do Avesso (Days Inside Out) in conversation with Eduardo Sá, on Portuguese radio “Antena 1”.