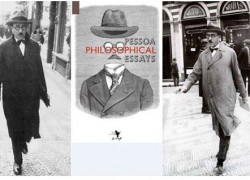 Fernando Pessoa (1888-1935) is considered to be a great European intellectual and a preeminent Portuguese modernist.  Born in Lisbon, he grew up in South Africa and had an English education at St. Joseph’s, a Dominican convent school, in Durban.  In 1901, he passed the Cape School Higher Examination with distinction, and in 1903, he won Queen Victoria’s Memorial Prize for the best essay in English.  After returning to Portugal in 1906-1907, Pessoa enrolled in philosophy classes at the University of Lisbon.   He wrote poetry, fiction, and essays on topics ranging from politics and economics to mysticism and astrology.   Importantly, Pessoa wrote several essays in English on philosophy.

If writing is a form of autobiography, as composition teacher Donald Murray says, then much of the paradox surrounding Pessoa’s writings involve the ambiguity of his “factless autobiography” and the many personalities that are attributed to him.  Pessoa created complicated sets and subsets of authorial voices: heteronyms, semi-heteronyms, pre-heteronyms, and sub-heteronyms.  The heteronym is a personality that allows a writer to explore ideas and feelings outside his own person—it’s like a public mask.  Pessoa’s heteronyms—Alberto Caeiro, Ricardo Reis, and Álvaro de Campos —offer different ideas, feelings, and writing styles than his own.

In 1915, Pessoa employed the first heteronym Álvaro de Campos in a modernist Portuguese review Orpheu.  Some scholars believe that the plurality of heteronyms demonstrates a conception of self based on the multiplicity of Nietzsche’s ‘decentered self.’

Certainly, literary alter egos were common among twentieth century writers.  T.S Eliot had Prufrock, Ezra Pound had Mauberley, Rilke had Malte Laurids Brigge, and W.B. Yeats had Leo Africanus, Michael Robartes, Owen Aherne, and Crazy Jane.  Pessoa’s heteronyms are poets and his semi-heteronyms are prose writers.  In contrast to heteronyms, semi-heteronyms write in the same style as the author but have different ideas and feelings than him.  We’re familiar with semi-heteronyms Bernardo Soares in the Book of Disquiet and the Baron of Teire in Education of a Stoic.

Underlying the work of all the various heteronyms are pre-heteronyms: Alexander Search and Charles Robert Anon, who contributed to the writings collected in the previously unpublished Philosophical Essays: a Critical Edition.

According to the editor Nuno Ribeiro in his Introduction, Pessoa gave both pre-heteronyms brief biographies.  Anon is a single man, 18, and an “idealistic philosopher” who passes “sentence of excommunication of all priests and all sectarians of all religions in the world.”  He is interested in the limits of science, the problem of free will, and the metaphysics of causation.  On the other hand, Search resembles Pessoa himself: he was born on June 13, 1888 in Lisbon, and he discourses on the metaphysics of causation and the nature of rationalism. 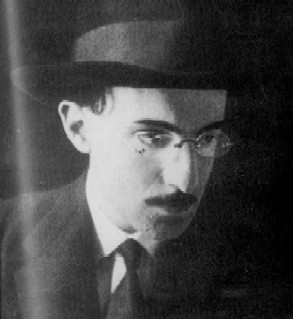 Ribeiro observes that Pessoa’s archive contains two reading notebooks of Search and Anon, showing that they were familiar with Continental post-Cartesian rationalism and idealism.  The editor maintains that Pessoa’s pre-heteronyms offer counterpoise to the author’s own philosophical ruminations.  In a way, the essays are similar to Pound’s Cantos in that one cannot discover unity or coherence among them.  Clearly, Pessoa experimented with multiple perspectives and ways of approaching philosophical problems.  He writes multiple philosophies, not a single coherent system.

The philosophical essays are thematically similar to Schopenhauer’s writings, especially his essay on free will, which Pessoa owned in a French translation.  The writing style resembles Pascal’s Pensees, Nietzsche’s Human, All Too Human, and even Wittgenstein’s Philosophical Remarks in that they are fragments on various philosophers and topics: rationalism, free will, causation, Pascal, Heraclitus, and Thomas Aquinas.

The essays will unlikely appeal to Anglo-American philosophers who eschew literary writing in favor of formal logic and linguistic analysis.  Pessoa’s meditations are impressionistic and fragmentary, not rigorously argumentative.  Thereby, he provides no deductive proofs or formulae.  Rather, he provides notebook entries that show a brilliant mind at work—profound insights without logical apparatus.

The newly published essays will allow readers to explore Pessoa’s philosophy in the context of his work.  Although Pessoa claimed to be a “poet animated by philosophy,” we can now consider him to be a philosopher, not merely a poet who researched philosophy.  In this way, Pessoa was a poet-philosopher akin to W.B. Yeats, not like T.S. Eliot or Wallace Stevens, who wrote on philosophical themes.

A recent monograph on Pessoa and Yeats by Patricia Silva-McNeill maintains that the two poets had several interests in common: esotericism, mysticism, and spiritualism.  However, few scholars recognize that both modernist poets had serious philosophical interests and wrote about them in detail.  For example, both Pessoa and Yeats had carefully studied Kant, Schopenhauer, and Nietzsche.  In their own way, the poets endeavored philosophical research to bolster an ethics of belief in the supernatural and worlds unseen.

In regard to the unknown, we read the following remark in The Book of Disquiet:

We generally give to our ideas about the unknown the color of our notions about what we do know: If we call death a sleep it’s because it has the appearance of sleep; if we call death a new life, it’s because it seems different from life. We build our beliefs and hopes out of these small misunderstandings with reality and live off husks of bread we call cakes, the way poor children play at being happy.

But that’s how all life is; at least that’s how the particular way of life generally known as civilization is. Civilization consists in giving an inappropriate name to something and then dreaming what results from that. And in fact the false name and the true dream do create a new reality.

In the Philosophical Essays, Pessoa rehearses ideas that were eventually elaborated in The Book of Disquiet.  He endorses a version of rationalism that is consistent with Kant’s enlightenment vision—the individual who “dreams to create a new reality” breaks free of the tutelage of religious dogmas and the strictures of scientific materialism to discover his own justified beliefs.  In contrast to atheism and agnosticism, a rationalist may withhold belief, or refrain from skeptical disbelief, by adopting an attitude of tolerance—a kind of Keatsian ‘negative capability’—that is, an awareness of the limits of human knowledge.  This perspective allows an individual to perceive his own reality—a mind making the world—in consequence of Kant’s Copernican Revolution.  Accordingly, the faculties of the imagination and understanding actively engage with the empirical data of our senses.

In the “Essay on the Nature and Meaning of Rationalism,” Pessoa makes the following remark:

Reality is not only stones and plants, with a moving sprinkling of animals.  It is also the dreams, the visions, the mystical experiences, of the substance and passing of mankind….The end of reason is a weariness of thinking.  Yet reason is so strong that even its weariness is a part of its strength and we dream rationally if we have learned reason. (8)

Pessoa’s epistemic tolerance is within the scope of pure reason: it allows the ‘immutable’ spirituality of Heraclitus, the ‘infinite’ God of Thomas Aquinas, and human freedom to create gods in our own image.  Accordingly, Pessoa’s rationalism admits spiritualism, mystical experience, and the even the primitive representation of God as a wooden idol.  For, like Baudelaire who scolded a man for wanting to toss away a wooden idol, Pessoa similarly remarks, “Et si c’etait le vrai Dieu?” –What if it is the true God?