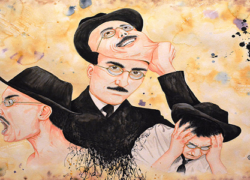 Like Richard Ellmann’s James Joyce, Richard Zenith’s Pessoa immortalizes the life of one of the twentieth century’s greatest writers.

Eighty-five years after his wrenching death in a cramped Lisbon apartment, where he left more than 25,000 manuscript sheets in a wooden trunk, Fernando Pessoa (1888–1935) remains one of the most enigmatic and underappreciated poets of the twentieth century. Celebrated for writing in dozens of different poetic voices, known as heteronyms, Pessoa has finally found his definitive biographer in renowned translator Richard Zenith.

Setting the story of Pessoa’s life against the nationalistic currents of early twentieth-century European history, Zenith charts the depths of Pessoa’s explosive imagination and literary genius. Much as José Saramago brought one of Pessoa’s heteronyms to life in The Year of the Death of Ricardo Reis, Zenith traces the backstories of virtually all of Pessoa’s imagined personalities, demonstrating how they were projections, spin-offs, or metamorphoses of Pessoa himself. Nothing less than a literary masterpiece, Zenith’s monumental work confirms the power of Pessoa’s words to speak prophetically to the disconnectedness of modern life.

Richard Zenith is an acclaimed translator and literary critic. His translations include Pessoa’s The Book of Disquiet and Fernando Pessoa and Co.: Selected Poems, which won the PEN Award for Poetry in Translation. The recipient of Portugal’s Pessoa Prize, Zenith lives in Lisbon, Portugal.