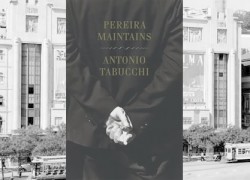 Dr. Pereira is an aging, lonely, overweight journalist who has failed to notice the menacing cloud of fascism over Salazarist Lisbon. One day he meets Montiero Rossi, an aspiring young writer whose anti-fascist fervor is as strong as Pereira’s apolitical languor. Eventually, breaking out of the shell of his own inhibitions, Pereira reluctantly rises to heroism―and this arc is “one of the most intriguing and appealing character studies in recent European fiction” (Kirkus).

“Pereira Maintains is small only in size. Its themes are great ones―courage, betrayal, fidelity, love, corruption; and its treatment of them is subtle, skillful, and clear. It’s so clear, in fact, that you can see a very long way down, into the heart of a flawed but valiant human being, into the sickness of a nation, into the depths of political evil. It’s the most impressive novel I’ve read for years, and one of the very few that feels truly necessary.” (Philip Pullman)

Antonio Tabucchi, a contemporary Italian writer and academic, was born in Pisa, Italy (1943), and died (2012) in Lisbon, Portugal, his adopted home. The son of a horse trader, he studied literature and philosophy before taking up writing himself. Over the course of his career he won France’s Medicis Prize for Indian Nocturne, the Italian PEN Prize for Requiem, and the Aristeion European Literature for Pereira Declares. A staunch critic of former Italian ex-prime minister Silvio Berlusconi, he once said that “democracy isn’t a state of perfection, it has to be improved, and that means constant vigilance.”

Patrick Creagh, born John Patrick Brasier-Creagh (1930) in London, UK died in Italy (2012). He was educated at Wellington College and Brasenose College, Oxford, where he read English.  A award-winning poet and translator, he was writer in residence at Princeton in 1971-1972, and later lectured on Dante at Columbia University. At Oxford he met his first wife, Lola Segre. In the late 1950s, the couple settled in Rome, where Creagh worked as a tutor. In Rome, he became friends with the American composer John Eaton for whom he wrote several opera libretti. He won the John Florio Prize in 1972 for his translation of the Selected Poems of Giuseppe Ungaretti, and again in 1990 for Danube by Claudio Magris and Blind Argus by Gesualdo Bufalino. Following his first wife’s sudden death in 1960, Creagh returned to London, but a few years later he went back to Italy with his second wife, Ursula Barr. After Creagh and Barr separated in the early 1980s, he and his partner Susan Rose lived  in Panzan, Italy, until his death. For many years, Creagh immersed himself fully into the life, tastes and sounds of Italy, learning to speak Italian like a native and mingling with his Italian neighbors. From 1966 to 1969 he was responsible for organizing the Poetry Readings of the Festival of Two Worlds at Spoleto, where he featured and acted as an interpreter for such famous poets as Ezra Pound, Pablo Neruda, Allen Tate, Charles Olsen, John Berryman, Octavio Paz, Rafael Alberti, Giuseppe Ungaretti, Yevtushenko, Allen Ginzberg and Ingeborg Bachmann.