Book: ‘Outside: A Guide to Discovering Nature’ – Editor’s Note 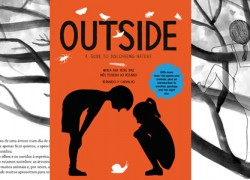 Even if we live in the city, nature is still all around us: clouds and stars, trees and flowers, rocks and beaches, birds, reptiles or mammals. What are we waiting for? Let’s jump off the couch and begin exploring!

Created in collaboration with a team of Portuguese experts, this book, which won the coveted BolognaRegazzi award, aims to arouse your curiosity about fauna, flora and other aspects of the natural world. It includes suggestions for activities and many illustrations to help the whole family get started, leave the house, and go out to discover – or simply admire – the amazing world that exists outdoors.

Originally published in Portuguese, in 2014, the book has been translated in French, Italian, English, Simplified Chinese, and Spanish.

Maria Ana Peixe Dias was born in Caldas da Rainha, Portugal, in 1976. She received her degree in Biology from the Faculty of Sciences, University of Lisbon, and continued on to achieve her PhD within the same institution, studying the wader birds of the Tagus estuary (focused mainly on those species that chase the tides). She then embarked on other adventures, to the remote islands of Selvagens and Desertas. There she studied the migration of seabird species such as Cory’s shearwaters and Bulwer’s petrels. Most recently, she has herself migrated to another Atlantic Island – Great Britain – to work with BirdLife International, the world’s largest nature conservation partnership. Dr. Dias has lived almost her entire life in Oeiras, close to Lisbon. Very early in her childhood she showed a particular interest for the insects and plants taking over the suburban gardens and vacant plots of her local neighborhood. These early explorations, together with the many books of her childhood, were the likely foundations of her ongoing passion for science, and in particular biology.

Inês Teixeira do Rosário was born in Lisbon in 1973. At age 3 her family moved to Alentejo where she grew up in contact with nature. In her own words: “I received a Ph.D. in Ecology from the University of Lisbon (Faculty of Sciences) in 2013 and I am currently working in the Conservation Ecology research group of Centre for Ecology, Evolution and Environmental Changes (cE3c). My research focuses on ecosystem services and natural capital in the montado. For many years I have been involved in ecological research using as models small mammals of the montado. I currently collaborate with several colleagues, both from CE3C and from other research centres (Lund University Centre for Sustainability Studies –LUCSUS; Institute for Environmental Studies, VU University Amsterdam), covering different areas of research connected with ecosystem services. This cooperation is occurring within the OPERA (Operational Potential for Ecosystem Research Applications) project focusing on enabling the connection between ecosystem services science and practice by stakeholders.”

Bernardo P. Carvalho (illustrator) was born in Lisbon in 1973. He attended the College of Fine Arts in Lisbon, Portugal. He is a co-founder of the book publishing house Planeta Tangerina. In 2008, with the book “Pê de Pai” (D for Dad) he won an Honorable Mention Award in the Best Book Design from All Over the World, sponsored by Book Art Foundation. In 2009, he was one of the winners in the 2nd CJ Picture Book Awards (Korea), with the book “As Duas Estradas” (The Two Roads). That year he also won the National Award for illustration with the book “Depressa Devagar”. In 2011, “O Mundo num Segundo” was distinguished as one of the best of the year by the Banco del Libro of Venezuela.