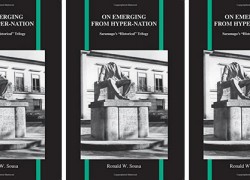 ‘On Emerging from Hyper-Nation’ represents Ronald W. Sousa’s attempt to answer the question, “Why do I smile on reading one of Saramago’s ‘historical’ novels?” Why that reaction of emotional release? To answer the “smile question” the book engages in a critical mode that could be described as “discourse analysis.” It combines several critical strains and relies on basic concepts from Freudian and Lacanian psychoanalysis, Adlerian psychology, and contemporary cognitive psychology for their discourse-analytical value rather than as entrées into psychoanalytical reading per se.

The introductory chapter presents some of the concepts that underlie that compound analytical modality and sets out an overview of twentieth-century Portuguese social and economic history. Then, with an eye to answering the “smile question,” the book reads Nobel Laureate José Saramago’s three novels, Baltasar and Blimunda (1982), The Year of the Death of Ricardo Reis (1984), and The History of the Siege of Lisbon (1989). Or, better, it seeks to read Sousa’s own reading of the three works, since focus falls on how each novel seeks to construct both its own reading and also Sousa as its reader.

The discussion brings to light a number of textual phenomena that bear upon the “smile question.” Among them are that the novels invoke, often subtly, the fascist hermeneutical heritage remaining from before the revolution of 1974 as a constituent part of their communication with the reader; that they summon up historical trauma; that they function as Freudian-style “tendentious jokes”; and that, through these various invocations, they seek to constitute a postrevolutionary Portuguese subject. The reading of Sousa’s reading, then, ends up being a reading of some of the cultural forces at work in postrevolutionary Portugal.

About the Author
Ronald W. Sousa is Professor of Portuguese, Spanish and comparative literature, and Head of the Department of Spanish, Italian, and Portuguese at the University of Illinois, Champaign-Urbana. He has authored or edited several books on Portuguese literature and literary criticism and has also published a number of translations from Portuguese.
Book Details