Book: ‘Now and at the Hour of our Death’ by Susana Marques – Editor’s Note 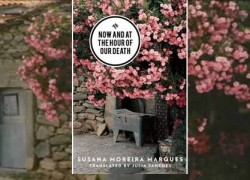 A journalist with a poet’s sensibility, a poet with a journalist’s clear eye, Susana Moreira Marques succeeds in creating a whole new kind of book about the lives of people dying and their families.

The author finds herself in Trás-os-Montes, a rural region in northeastern Portugal. She is there to accompany a palliative care team in their patients’ homes. The villages are half empty, the young people have left for work elsewhere. The bars have closed. A way of life is dying. Great distances separate the living from the ones about to die. Rooted in one reality, the book speaks to us all.

In the first section, the author presents a series of vignettes that blur fiction and reality and universalises questions raised by impending deaths. In the second section, the author tells of a small number of people as they approach death. Much of this section is in the form of oral history, or a transcription of their words. In the very short final section, the perspective widens again to the author’s personal (poetic and philosophical) impressions.

“This book is fearless and luminous and full of grace; it travels to the edge of death and finds life there. Its attention to the particulars of love – between the ones who will go and the ones they will leave – is something close to sublime.”–Leslie Jamison, author of The Empathy Exams

Susana Moreira Marques is a writer and journalist. She was born in Oporto in 1976 and now lives in Lisbon, where she writes for Público and Jornal de Negócios. Between 2005 and 2010 Moreira Marques lived in London, working at the BBC World Service while also serving as a correspondent for Portuguese newspaper Público. Her journalism has won several prizes, including the Prémio AMI—“Jornalismo Contra a Indiferença” and the 2012 UNESCO “Human Rights and Integration” Journalism Award (Portugal). Agora e Na Hora da Nossa Morte (Now and at the Hour of our Death) is her first book.

Julia Sanches is an assistant editor at Asymptote. Brazilian by birth, she has lived in New York, Mexico City, Lausanne, Edinburgh, and Barcelona. She obtained her undergraduate degree in Philosophy and English Literature from the University of Edinburgh and a masters in Comparative Literature and Literary Translation from Universitat Pompeu Fabra. She was runner-up in Modern Poetry in Translation‘s poetry translation competition and winner of the SAND journal translation competition. Her translations have appeared in Suelta, The Washington Review, Asymptote, Two Lines Press and Revista Machado.

Source: & other stories publishing
Related article:  Commentary  on the author by the translator, Julia Sanches.