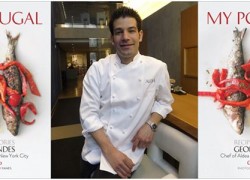 In My Portugal, George Mendes, chef and owner of Michelin-starred Aldea, a New York City restaurant, introduces us to the world of Portuguese cuisine, offering 125 mouthwater­ing recipes that showcase the wide range of dishes that come from this coastal country. The collection balances Mendes’s popular restaurant recipes, such as his signature Duck Rice and Garlic Seared Shrimp, with his takes on classic Portuguese dishes, such as Salt Cod, Potato, and Egg Casserole; Mozambique Shrimp and Okra with Piri Piri; Eggs Baked with Peas, Linguiça, and Bacon; Butter Cookies; and more. His stories illustrate the wealth of culinary resources in Portugal—fresh seafood, savory meats, and crisp vegetables. With delicious recipes and stunning photographs of the country, My Portugal takes the reader on an unforgettable journey.

George Mendes is a Michelin-starred chef and owner of Aldea in New York City. Named one of Food & Wine magazine’s ten “Best New Chefs” in 2011, Mendes is regularly featured in national newspapers, magazines, and websites, along with television appearances, including a run on Bravo’s Top Chef Masters. Genevieve Ko is a food writer who has coauthored cookbooks with several internationally renowned chefs. Ko is currently the contributing food editor at Health.