Book: ‘My Art and My Stetson: Between Europe and America’ by Manuel de Queiroz – Editor’s Note 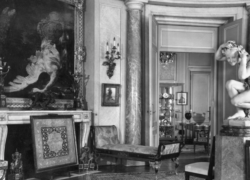 My Art and My Stetson‘s main character, Aleixo de Queiroz Ribeiro, a Portuguese sculptor whose remarkable personal and professional trajectories took him to places as diverse as Paris, Lisbon, Sofia, Addis Ababa, Chicago, Philadelphia, and New York at the end of the 19th century and beginning of the 20th. Based on real people and events, the novel is primarily a work of fiction structured between two alternating narratives: the first, based on the final years of the protagonist’s life in the United States and the North of Portugal, constructed according to the different, and at times contradictory, viewpoints that swirl around this contentious and paradoxical figure; the second, centered on his formative years in Paris and Lisbon, according to Aleixo’s own perceptions. It is from these diverse perspectives and points of view that the most important moments of Queiroz Ribeiro’s story are presented, often through a voice full of refined irony and wry humor: his celebrated marriage in Philadelphia to Sarah Elizabeth Stetson, the widow of the multimillionaire philanthropist John B. Stetson, owner of the biggest and most renowned hat company in the world; his early years in Paris, where he crosses paths with some of the era’s greatest names in sculpture-like Rodin or Saint-Gaudens-and in literature-like Eça de Queiroz (the Portuguese writer) and António Nobre (the Portuguese poet), or Emile Zola; his brief and polemic stay in Lisbon, where he encounters figures as distinct as Eleonora Duse (the most famous Italian actress of her time), the Duke of Palmela, or the Portuguese King Carlos; his departure for the United States, where he becomes the Portuguese consul in Chicago. Adding to the overall picture, the novel conveys the sculptor’s constant reflections about his own work, at a crucial time when the various esthetic currents that would eventually lead to the birth of modernism intersect-the final years of the nineteenth century. Intrinsic to the narrative itself, the history of the era simultaneously emerges, not as mere background scenery, but rather as it is witnessed and experienced by the actual individuals who lived it: the fall of the Portuguese monarchy and the turbulent early years of the Republic, the Spanish-American War, the Paris Universal Exposition of 1900, and the First World War. From the end of the century Parisian effervescence to his interaction with the high society of Philadelphia and New York, from early artistic devotion and persistence to a certain mature dandyism in the later years, from public recognition to critical derision, from sensibility to pragmatism, and from ambition to disappointment, My Art and My Stetson dramatically conveys the conflicts and yearnings of a charismatic, controversial and misunderstood man, as well as the numerous contradictions inherent to the epoch during which the narrative takes place.

“Here’s a marvellous adventure novel. The protagonist isn’t some errant knight, but a sculptor with a penchant for travel, and a diplomat by circumstance. The complex intrigues full of bouncing repercussions which populate the story, therefore, take place between France, Portugal and the United States. A contemporary of Rodin, whom he meets in Paris and Meudon, Queiroz Ribeiro-such is the name of this wonderful sculptor-becomes the witness to an entire epoch, the end of the 19th, beginning of the 20th Centuries, whose artistic intrigues, journalistic fever and urban transformations are the foundations for our modernity. A meeting in Paris with a young, passionate Slavic sculptress propels the novel into a love intrigue that constitutes a genuine narrative discovery. But it’s with the widow of the American millionaire, John B. Stetson, owner of the famous Stetson hat company, that he will commune in wedding bliss. Which, to the reader’s great joy, won’t cure him of his passion for travel. He thus finds himself, at the end of the novel, in a “Paço” (estate), in the north of Portugal, where he will find through death, his final resting place. The reading of this book is akin to a passionate voyage into a world that is no less passionate, marked by artistic rivalries, romantic and journalist intrigues and, against the backdrop of a world war, the sometimes tragic ricochets of history.” – Gabriel SAAD, Doctor of Iberian and Iberian-American Studies, University of the Sorbonne Paris-III, Writer, translator, literary critic

“My Art and My Stetson is both a novel and a pseudo-biography. A novel because its characters think, reflect, act in autonomous fashion; pseudo-biography because the author, Manuel de Queiroz, has retraced, one can even say reinvented, the trajectory of a great-uncle, a renowned sculptor, investigating with perseverance and minutia the places where the latter lived, the people he encountered, the events he experienced, breathing new life into them all in the process. The counterpoint that’s brought to bear on the construction of the work (formative period and early years in Paris intertwine closely, as the chapters progress, with the subsequent mature and respectable later years in the United States and Portugal) endows the piece with a great convergence of points of view as well as a perspective on feelings and situations that’s cavalier in nature. The whole benefits from an approach that’s very sure of its fictional technique, allied with a rich, supple language that’s accompanied by a profound knowledge of the spoken and written word of the second half of the 19th Century, which flows here effortlessly and in a natural manner; should the reader accept to dive head first into a world that’s so close, yet so distant.” – Claude MAFFRE, Professor Emeritus of Portuguese at the University Paul-Valery of Montpellier, specialist in the 18th Century

“In My Art and My Stetson, nothing is real, everything is fiction, the main character and the events are but a starting point […] There exists a permanent dialogue between reality and imagination. The novel is in the tradition of the great works of the era (the end of the 19th century) by Eça de Queiroz, Machado de Assis, Henry James […]. This is, without a doubt, a great period piece, capable of creating stories, constructing characters and fictionalizing socio-historical events.” – Carlos Reis, Professor of Literature, University of Coimbra, President of Universidade Aberta in Diário de Notícias.

Manuel de Queiroz was born in Porto, North of Portugal, and lives in Lisbon where he works as a writer, architect, and urban planner. For several years he has been a member of the Portuguese PEN Club Board, the Portuguese Order of Architects National Board, and the Architects Council of Europe Executive Board. He was 19 years old when he started publishing poems and short stories regularly in several Porto and Lisbon newspapers and magazines, followed by a first book of poems, Encontro (1969). His first novel, O Dedo na Ferida (The Finger on the Spot), published in 2001, won the 2002 Portuguese PEN Club Award for First Novel. In 2008, he published the novel, Os Passos da Glória, selected for the Fernando Namora Award shortlist. In 2020, this novel won a grant from the Portuguese Government for its publication in the USA, under the title, My Art and My Stetson.

This novel was published in the USA with the support of the General Directorate for Books, Archives and Libraries/DGLAB and Camões, Instituto de Cooperação e da Língua I.P/ Camões I.P. – Portugal. The translation of the text to English was supported by FLAD’s Alberto Lacerda Translation Program. Photo: https://gulbenkian.pt/museu/en/evento/collecting-modus-operandi-1900-1950/