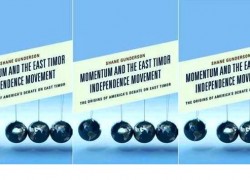 ‘Momentum and the East Timor Independence Movement: The Origins of America’s Debate on East Timor’ examines the campaigns by people in the United States on behalf of those seeking peace for East Timor. The diplomatic work of voluntary advisors and supporters living in the United States in the early years of the movement have not been thoroughly explored until now. Through in-depth interviews with twenty activists and intellectuals involved in the East Timor movement from 1975-1999 and qualitative data analysis on information obtained from these interviews, this book explores “momentum” and “turning points” as perceptions in the minds of individual movement actors. The author takes readers through a combination of historical events that shaped social movement actors’ attitudes and started a social movement momentum sequence in 1995. The East Timor All Inclusive Dialogue, the Timorization of Indonesia, the public outcries, organizational evolution, and a number of other turning points in the movement represented a series of successes that led to East Timor’s independence.