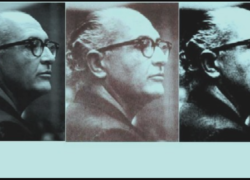 An undisputed giant of twentieth-century Portuguese letters, writer and literary critic Jorge de Sena (1919–1978) spent the most productive decades of his life away from Portugal, teaching at the University of Wisconsin–Madison and the University of California, Santa Barbara. In the essays gathered in this collection, George Monteiro deftly weaves together his readings of Sena’s poetry and prose, both literary and critical, with evidence drawn from the deep well of Sena’s biographical archive, focusing in particular on his Brazilian and U.S. years. This expansive overview of Sena’s unparalleled career, intended to commemorate the centenary of the writer’s birth, is also a tribute to Monteiro’s own remarkably voluminous and far-reaching body of work on the intersection of Portuguese and Anglo-American literary studies.

George Monteiro (1932-2019) was professor emeritus of English and Portuguese and Brazilian Studies at Brown University. He is author of Fernando Pessoa and Nineteenth-Century Anglo-American Literature.

Francisco Cota Faguntes is professor emeritus of Portuguese in the Department of Languages, Literatures, and Cultures at the University of Massachusetts Amherst.