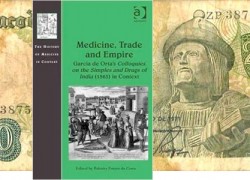 Garcia de Orta’s Colloquies on the Simples and Drugs of India (1563) was one of the first books to take advantage of the close relationship between medicine, trade and empire in the early modern period.

The book was printed in Goa, the capital of the Portuguese empire in the East, and the city where the author, a Portuguese physician of Jewish ancestry, lived for almost thirty years. It presents a vast array of medical information on various drugs, spices, plants, fruits and minerals native to India or adjoining territories. In addition, it includes information concerning indigenous methods of healing as well as a far-reaching assessment of ancient and modern authors on Asian materia medica.

Orta’s book had a market in Asia but was particularly valuable to a European audience. It soon attracted the attention of various European authors and printers by providing the basis for adaptations, commentaries and editions in various languages, prompting a successful and complex trail of medical knowledge in transit.

Authored by an interdisciplinary team of prominent international scholars, the volume takes into account recent historiographical trends and provides a contextualized and innovative analysis of the histories and reception of the Colloquies. It emphasizes the value of the work to historians today as a symbol of the impact of geographical expansion and globalization in a sixteenth-century medical world.

Palmira Fontes da Costa holds a PhD in History of Science from the University of Cambridge and is Assistant Professor in Historiography and History of Science at the Universidade Nova de Lisboa (FCT). She is also a Member of the Interuniversitary Centre of History of Science and Technology (CIUHCT, Lisbon). Her areas of expertise are the history of medicine and the history of natural history during the early modern period. She is the author of The Singular and the Making of Knowledge at the Royal Society of London in the Eighteenth Century, 2009 and, among others, the editor, of Percursos na História do Livro Médico 1450-1800, 2011 (edited with A. Cardoso) and O Corpo Insólito: Dissertações sobre Monstros no Portugal do Século XVIII, 2005.