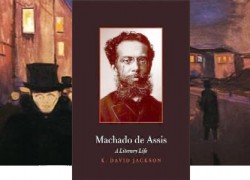 Novelist, poet, playwright, and short story writer Joaquim Maria Machado de Assis (1839–1908) is widely regarded as Brazil’s greatest writer, although his work is still too little read outside his native country. In this first comprehensive English-language examination of Machado since Helen Caldwell’s seminal 1970 study, K. David Jackson reveals Machado de Assis as an important world author, one of the inventors of literary modernism whose writings profoundly influenced some of the most celebrated authors of the twentieth century, including José Saramago, Carlos Fuentes, and Donald Barthelme.

Jackson introduces a hitherto unknown Machado de Assis to readers, illuminating the remarkable life, work, and legacy of the genius whom Susan Sontag called “the greatest writer ever produced in Latin America” and whom Allen Ginsberg hailed as “another Kafka.” Philip Roth has said of him that “like Beckett, he is ironic about suffering.” And Harold Bloom has remarked of Machado that “he’s funny as hell.”

K. David Jackson is professor of Portuguese at Yale University. He specializes in Portuguese and Brazilian literatures, modernist movements in literature and other arts, Portuguese literature and culture in Asia, poetry, music, and ethnography. His publications include: a photograph album, A Hidden Presence: 500 Years of Portuguese Culture in India and Sri Lanka (Macau, 1995); a study of creole folk verse in Asia, Sing Without Shame (Amsterdam 1990); Canta sen Vargonya, (Macau, 1996); Builders of the Oceans (Lisbon, EXPO, 1998, also in Portuguese and Spanish); three CDs in the series The Journey of Sounds (Lisbon, 1998); two volumes on the Brazilian and Portuguese avant-garde movements, A Vanguarda Literária no Brasil (Frankfurt, Vervuert, 1998) and As Primeiras Vanguardas em Portugal (Madrid, Iberoamericana, 2003); a CD-ROM, “Luís de Camões and the First Edition of The Lusiads, 1572,” and a recent book on the literature of empire, De Chaul a Batticaloa: As Marcas do império marítimo português na Índia e no Sri Lanka (Ericeira, 2005). Professor Jackson recently edited Haroldo de Campos: A Dialogue with the Brazilian Concrete Poet (Oxford, 2005) and the Oxford Anthology of the Brazilian Short Story (2006). He is author of a new interpretation of Fernando Pessoa in English, the Adverse Genres in Fernando Pessoa (Oxford, 2010).