Book: Macao – Peoples and Places, Past and Present – Review 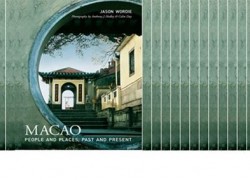 Every now and then, a reviewer has the pleasure of being able to write about a book that he has really enjoyed reading and which gives him only pleasure to review. One might expect such a book to be both short and on a subject of which the reviewer might claim a little prior knowledge, but Jason Wordie’s Macao: Peoples and Places, Past and Present is neither of these things. It is mammoth in size, nearly 450 large pages in length and heavy to hold. I confess to a woeful ignorance of the place it describes so lyrically.

Reading it has proved to be an absolute delight. When it thumped onto my table, I thought to myself “Ah, good, a guide book, I can just dip into this and don’t have to read it all,” only to start reading it from its beginning at the Macao Barrier Gate. Five days later, I amazed myself by finding that I had emerged from its closing pages at Coloane and had been absolutely enthralled every time I had buried my head in its text.

Macao is a superb book, beautifully illustrated with photographs (taken with evident love of the ubject by Professor Anthony Headley and retired publisher Colin Day) and drawings (the winsome maps and diagrams are by Wee Kek Koon).

The cover illustration sums it up, drawing the reader deep into Macao through the Moon Gate of the Tin Hau Temple in Areia Preta, where a vista opens upon another door through which, in the distance, is dimly seen an interior sanctum. Macaothe book does this for Macao the place; each building or site described stimulating its author to ruminate upon the history, culture and above all the people connected with it. Each thread Wordie teases from Macao’s fabric leads to another, as you follow him through the labyrinth of Macao’s meandering streets and back ways.

Chinese and Portuguese history and culture naturally predominate in this book, as they do in Macao itself. You only have to browse through the generous photographs adorning its every page to appreciate how glorious is the preservation of architecture in Macao and how sadly bereft we are in Hong Kong. Whether churches, temples, forts, Government buildings, public squares and gardens, libraries and the oldest light house on the China coast, Jason Wordie accompanies you to see them all.

All of Macao life is in these pages. Wordie is particularly good at bringing to light the culinary traditions, the items of food and drink, the flora and fauna, the art and poetry of each of the multifarious groups that have merged, but not so as to entirely lose their identity, in Macao’s melting pot.

If you want to find out how to find a genuine Burmese restaurant in Ho Lan Un, a Thai eatery in Cheoc Chai Un, or even an authentically Brazilian café in São Paulo, you need look no further than these pages.

If you prefer to avoid the millions of tourists who now flock to the major sites of the city, and are seeking the unexpected—something perhaps like the Portuguese book shop in Shui Hang Mei or the Filipino enclave in Sun Ma Lo, or maybe the opium warehouse in Noi Kong or the surprising Macanese architecture of the public library on the Rua da Campo—Wordie will tell you how to find it.

The author’s presence is felt on every page of this book. Wordie writes clearly and at times very amusingly.He can be engagingly cutting about what he doesn’t like; wicked asides and ironical put-downs of pretension pockmark the text. This is nowhere overpowering, though, and all his personal preferences are nicely wrapped. Wordie takes care to present the foundation for his views. He is persuasive as well as entertaining.

Macao is also a scholarly work, possessing an exhaustive bibliography, a well-organized index and useful footnotes. Portuguese and Chinese names and words are cited in their original forms and always with English translations.

Those who are familiar with the author will not be surprised by this evidence of erudition, for Jason Wordie has a long-established reputation as the pre-eminent historian of Hong Kong’s streets and buildings, and of much of the history that has led to their present shapes. Many will have accompanied him on his historical walks through areas of Hong Kong, Kowloon and the New Territories, and will have read his regular column in the South China Morning Post.

His more than two decades of study in Hong Kong have resulted in the publication of several authoritative works, for instance his work on Hong Kong’s fortifications, Ruins of War, and the two volumes of Streets, describing Hong Kong and Kowloon. All of his books are characterized by attention to detail, but is safe to say that nothing he has published so far has been so compendious, or so beautifully produced, as is Macao. This is not just a guide to Macao, it is the biography of a city that Wordie clearly cherishes and has studied deeply over many years

Geographically, Wordies’s account may mystify those whose experience of Macao has so far involved little more than exposure to its all-too-successful attempt to bring Las Vegas to China, for his tour takes one from Taipa to Coloane with little more than a whisper of the existence of the monstrosity of the Cotai Strip. It is as if one has dozed off in a taxi after leaving Taipa and, having missed entirely the excrescences brought by the 21st century, arrived at the restaurant Fernando’s. If you want a guide to the world that the casinos have wrought, you must find another book, for Wordie abominates it.

If, as I did, you read your way right through this book, you will find themes emerge that make it well worth the time (I do not write “effort”, for reading this book is never such). The first that strikes this reviewer is the sheer complexity of the people who have created Macao and still live in their creation. Almost every race and nation of the Asian seaboard can now be found there and all live in harmony. They have formed a melange unique to this tiny spot on the planet.

The second theme that I would highlight is the way the place has reinvented itself over the centuries. As times have changed, the people of Macao have traded in cloth and foodstuffs between China and the world, spread the Christian religion to the East, sold guns and bells to the Japanese, peddled gold and opium to their neighbours, sold those neighbours to the Americas and Africa, and finally, in the city’s newest incarnation, built a playground for the Orient. Each change has been forced upon Macao as the world has changed around it.

Each change has forced many of its people to work in the underworlds of the sleazy or the downright criminal. The Macanese have had little option but to live by their wits in a hostile world, and Wordie sees little point in our turning up our noses if some of the results have not been savoury. Warts and all, he sees, Macao is a triumph of the human spirit when faced with adversity.

In this book, Jason Wordie looks Macao in the eye, discounts much that he doesn’t like, and triumphantly evokes the city he loves.
__________

(*) Nigel Collett is a former Lieutenant-Colonel in the British army and author of The Butcher of Amritsar. He is a contributor to the Asian Review of Books and is a moderator for the Hong Kong International Literary Festival he was instrumental in promoting the first event which had a focus on gay and lesbian writing in 2008. Collet attended Commonweal School, Swindon, England from 1963–70 and St Peter’s College in 1973, taking a Bachelor of Arts in Modern History. He served in the Devonshire and Dorset Regiment and in 1974 attended Sandhurst. In 2002 he earned a Master of Arts at the University of Buckingham. In 1981 he served as Company Commander with the Western Frontier Regiment under secondment to the Land Forces of the Sultan of Oman. In 1984 he was promoted to Major and transferred to the 6th Queen Elizabeth’s Own Gurkha Rifles, he was posted to Hong Kong, where he served from 1985–92, when he was promoted to Lieutenant-Colonel and was given command of the 6th and was Garrison Commander for the British Forces in Hong Kong and in Brunei from 1992–93.

Source: This review was first published in The Asian Review of Books. Reprinted with permission.