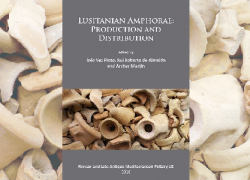 More than a century of archaeological investigation in Portugal has helped to discover, excavate and study many Lusitanian amphorae kiln sites, with their amphorae being widely distributed in Lusitania.

These containers were identified in Ostia and Rome from the 1970s and thereafter in many sites around the Mediterranean, but their numbers have always seemed scarce. Were they not being recognized and therefore underestimated? Were they all fish-product amphorae? Did they ever reach a significant market share in the other provinces of Hispania? And what was their contribution to the supply of the city of Rome or to other cities in the centre of the Empire?

This collective volume is a contribution to the discussion of these and other questions, and to a better understanding of the production and distribution of Lusitanian amphorae.

Inês Vaz Pinto Archeologist, researcher of the CEAUCP, professor at Universidade Lusíada de Lisboa from 1987 to 2006, responsible for the Roman Ruins of Tróia (Portugal) since 2006. Inês Vaz Pinto graduated in History (1983) and did a masters degree (1986) and PhD (1999) in the area of Classical Archeology. She was a professor of history and archeology at Lusíada University of Lisbon (1987-2006), and in 2006 became the archeologist in charge of the archeological site of Tróia, activity that continues to the present. Her doctoral thesis examines the common ceramics of Roman villae of São Cucufate and she has dedicated time to the study of other themes of Roman ceramics, thermal baths and the archaeological site of Tróia in several aspects, with particular emphasis on the production of salgas of fish and its trade in Amphorae.

Rui Roberto de Almeida graduated in History/variant of Archeology in 1998, he earned a licentiate in Prehistory and Archeology in 2007. In 2010 he began his work of doctoral studies, funded by the FCT, which has as its primary objective the food trade between Bética and Lusitania. In the last 15 years his research has been around the studies of amphorae as a privileged source for the knowledge of food trade between the Lusitania and the other provinces of the Roman Empire. In this particular field, his studies reach greater depth in the trade between the various hispanic provinces and encompass many urban centres and institutions both of the space peninsular (Mérida, Sevilha, Cartagena, Madrid, Barcelona, among others…) and European ( Netherlands, France, Turkey). Dr Rui Almeida has also dedicated time to other themes within the Roman ceramics, particularly those related to the production of honey and other food products of the South of Spain.

Archer Martin has been based since 1971 in Rome, where he took his graduate degree in 1980 at the Università degli Studi di Roma “La Sapienza”. He also had a research fellowship at the Scuola Archeologica Italiana di Atene in 1990. Martin has taught at the universities of Fribourg in Switzerland and Trento and Suor Orsola Benincasa (Naples) in Italy and served as Professor-in-Charge of the School of Classical Studies and Archaeology Supervisor at the American Academy in Rome. Currently he directs the American Academy’s Howard Comfort FAAR ’29 Summer School in Roman Pottery (AAR Pottery Summer School) and is associated with the University of Cologne. Martin has worked as a specialist in pottery and other finds in Italy, Greece, Turkey and Egypt with Italian, American, German and Austrian institutions.