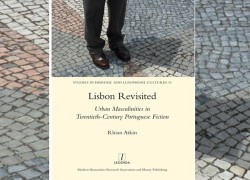 Twentieth-century Portugal saw dramatic political and social change. The monarchy was abolished, and a republic installed (1910), soon giving way to a long-lasting dictatorship (1926); a transition to democracy (1974) led to membership of the European Union (1986). But what do we know of how people lived during these periods? And how did men, in particular, respond to the changes taking place in society? In this illuminating and broad-ranging study, Rhian Atkin uses as case studies the work of Fernando Pessoa (1888-1935), Luís de Sttau Monteiro (1926-93) and José Saramago (1922-2010) in order to examine the relationship between socio-political change and the construction and performance of masculinities in the urban environment of Lisbon over the course of the last century.

Rhian Atkin is Lecturer in Portuguese Studies at Cardiff University.