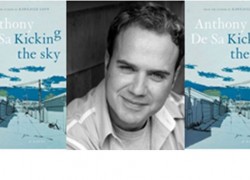 On a steamy summer day in 1977, Emanuel Jaques was shining shoes in downtown Toronto. Surrounded by the strip clubs, bars and body rub parlors of Yonge Street, Emanuel was lured away from his friends by a man who promised some easy money. Four days later the boy’s body was discovered. He had been brutally raped and murdered, and Toronto the Good would never be the same. The murder of the Shoeshine Boy had particularly tragic resonance for the city’s Portuguese community. The loss of one of their own symbolized for many how far they were from realizing their immigrant dreams.

Kicking the Sky is told from the perspective of one of these children, Antonio Rebelo, a character first introduced in Barnacle Love. Twelve-year-old Antonio prizes his life of freedom and adventure. He and his best friends, Manny and Ricky, spend their days on their bikes exploring the labyrinth of laneways that link their Portuguese neighborhood to the rest of the city. But as the details of Emanuel’s death expose Toronto’s seedier underbelly, the boys are pulled into an adult world of danger and cruelty, secrets and lies much closer to home.

Kicking the Sky is a novel driven by dramatic events, taking hold of readers from its opening pages, intensifying its force towards an ending of huge emotional impact.

Anthony De Sa grew up in Toronto’s Portuguese community. His short fiction has been published in several North American literary magazines. He attended the Humber School for Writers and now heads the English department and directs the creative writing program at a high school for the arts. He lives in Toronto with his wife and three sons.

“Anthony De Sa may be the most impressive two-book-oeuvre writer in Canada. His first, the story collection Barnacle Love, published in 2008, was a memorable evocation of life in Toronto’s Portuguese community, and was shortlisted for the Scotiabank Giller Prize and the Toronto Book Award. If De Sa’s second book, the novel Kicking the Sky, had been on this year’s Giller long list, which was announced Monday (it isn’t), I wouldn’t have been surprised. If it isn’t on the Toronto Book Award list, I’ll be shocked. De Sa, who is described on the book’s cover as a librarian-teacher in Toronto, has given us a beguiling coming-of-age story – harked back to an event that shocked the country and had massive repercussions – and at the same time managed to beautifully capture a community and an era.”

– Jack Kirchhoff, The Globe and Mail