Book: ‘In the Words of Wellington’s Fighting Cocks’ by Moisés Gaudêncio – Editor’s Note 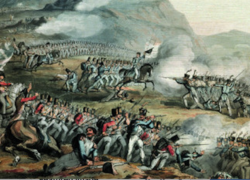 The literature of the Peninsular War is rich with vivid source material – letters, diaries, memoirs, and dispatches – but most of it was written by British soldiers or by the French and their allies. As a result, the history and experience of the Portuguese forces – which by 1812 composed close to half of Wellington’s Army – have been seriously under-represented. That is why this pioneering book, which publishes for the first time in English the after-action reports written by the commanders of Portuguese battalions, regiments and brigades, is so important. For these detailed, graphic firsthand accounts give us a fascinating insight into the vital contribution the Portuguese made to the allied army and shed new light on the struggle against the French in the Iberian Peninsula.

The authors provide an introduction tracing the history of the Portuguese Army prior to the Salamanca campaign of 1812, while tracking its organizational changes and assignment of commanders from 1808 to 1814. They include detailed notes on the after-action reports which set them in the context of each stage of the conflict.

Moisés Gaudêncio was born in Lorvão, Portugal and was raised very near the Bussaco mountain. He became fascinated by the stories told by his grandparents about the French, who were lost in the mountains and were chased by the peasants, after the battle. This led to his lifelong interest in the subject of the Portuguese role in the Peninsular War.

Having had numerous articles published on the Peninsular War and the British Army, the renowned historian and author Robert Burnham hosts the pre-eminent Napoleonic website, the Napoleon Series. This fascinating and all-embracing website, the largest of its kind, is a ‘must’ for anyone interested in the Napoleonic era.

Title:  In the Words of Wellington’s Fighting Cocks