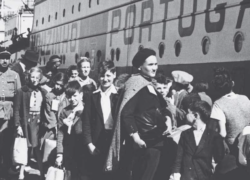 This riveting book describes the dramatic experiences of Jewish refugees as they fled Hitler’s regime and then lived in limbo in Portugal until they could reach safer havens abroad. Drawing attention not only to the social and physical upheavals these refugees experienced, Marion Kaplan also highlights their feelings as they fled their homes and histories, while having to beg strangers for kindness. Portugal’s dictator, António de Oliveira Salazar, admitted the largest number of Jews fleeing westward—tens of thousands of them—but then set his secret police on those who did not move along quickly enough. Yet Portugal’s people left a lasting impression on refugees for their caring and generosity.

Most refugees in Portugal showed strength and stamina as they faced unimagined challenges. An emotional history of fleeing, this book probes how specific locations touched refugees’ inner lives, including the borders they nervously crossed or the overcrowded transatlantic ships that signaled their liberation.

“This historical account transforms the refugee state in a condition that has been, and is today, daily present, capable of affecting each and every one of us.”—Manuela Consonni, ‘The Tel Aviv Review of Books’

“At a time when refugees gather on our borders, Hitler’s Jewish Refugees reminds us of another era and other refugees whose survival depended on the generosity of strangers and their governments.  Marion Kaplan vividly captures heartbreak and anxiety along with rare moments of euphoria among Jews fleeing German-occupied Europe.”—Claudia Koonz, Duke University

Marion Kaplan is Skirball Professor of Modern Jewish History at New York University. She is the author of Between Dignity and Despair: Jewish Life in Nazi Germany and a three-time winner of the National Jewish Book Award. 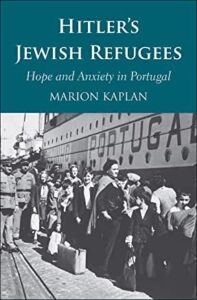