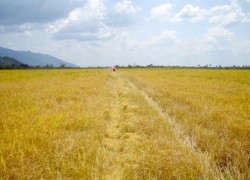 Helena DaSilva Martin’s book Walk Wit’ Me All Ova Guyana is a memoir portraying the first 21 years of  her upbriging in Guyana, originally known as British Guiana, the country where she was born to a Portuguese immigrant family from the islands.

Martin is uncertain about which islands. It could have been Madeira or the Azores. She writes “Bits of information were passed on here and there as I was growing up, but I never thought to ask for meaningful aspects of their lives. Most people never think of doing that until it is too late.” 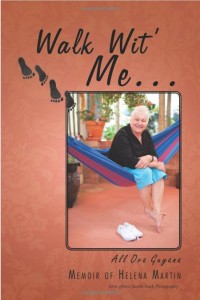 For most of her childhood, her family socialized with other members of the immigrant Portuguese community where everyone was related. Her parents were cousins. They moved many times from Georgetown to Pomeroon and then to the Rupununi open savannah next to the Amazon rainforest. They settled there twelve miles from Lethem in a remote village called Moco-Moco where there was no school and life proved difficult.

The family then decided to move the children to board with relatives in Albouystown, a slum in the outskirts of ethnically diverse Georgetown, the capital, so that they could attend school. Of her mother’s choice of school she writes, “She wanted us to attend a school where all the Putagee (Portuguese) children went because we were fair skinned.”

Of her Portuguese heritage growing up in Georgetown she writes:

“The more ambitious got down to opening businesses to become self-sufficient. Most stuck to the same line of work their ancestors were comfortable with. They operated bakeries, rum shops and salt-goods shops. Many others were sales assistants or white collar workers. To be seen working for the municipality was classed as degrading; I cannot remember ever seeing a Putagee hanging off the side of the M&TC (Mayor and Town Council) garbage truck. Our fair complexion was a mark of social standing even if you didn’t have a ‘pot to piss in’ as they say. I know Portuguese people who lived in abject poverty, but they still had airs an’ graces in public. They were capable of masquerading social status; as long as you didn’t follow them home.”

The book not only speaks of Martin’s experiences growing up Portuguese, discovering the country of her birth, but also of her visits back to her homeland from Australia where she now lives.

Guyana is the only English speaking country in South America. It was named “Guiana,” the Amerindians word for “land of the many waters,” by Christopher Columbus who first sighted the land in 1498. The country is bordered by the Atlantic Ocean on the North; Brazil on the South; Suriname on the East and Venezuela on the West.

In 1835, the first Portuguese people arrived there from the Portuguese island of Madeira. Between 1834 and 1882, some 30,645 Portuguese settled in British Guiana, the vast majority from Madeira, but others from the Azores Islands.  Others may have come from  Portuguese speaking Cape Verde and Brazil.

The author uses colloquialisms and the vernacular of the country she describes. As she has said, “It may sound like another language so unless you were born and bred in Guyana you will need to refer to the glossary provided.”