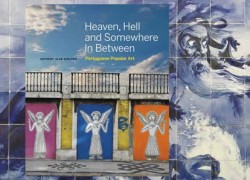 Popular art expresses the passion and verve emanating from the rich imagination and the social, political and religious experiences of its creators. In Portugal, this art of the people also conveys deeply seated, idealistic views of national identity, history and character.

Much Portuguese popular art focuses on three amorphous places: Heaven (the world of the saints, grace and salvation); Hell (the domain of the Devil, dystopia, annoyance and mischief); and Somewhere In Between (a country called Portugal whose denizens grapple with good and evil every day). Popular art evokes and gives form to history, contemporary events, authorized and popular religious beliefs and the push and pull between Portugal’s powerful but ambiguous relations with the sea and land.

Heaven, Hell and Somewhere in Between combines an in-depth analysis of Portuguese popular art and culture with stunning photographs of 40 artworks—ceramics, masks, puppets—and another 60 supporting images, from medieval frescoes and roadside icons to graffiti and images of carnival performers and artisans at work in their studios. Complex, contemporary, theatrical, political and often controversial, this is the theatre of a nation, where official ideologies collide with homegrown art and culture and spew forth deeply felt emotions, from ecstasy and transcendence to suffering and penitence.

Anthony Alan Shelton is director of the Museum of Anthropology (MOA) and professor at the University of British Columbia. An anthropologist, administrator, curator and teacher, he is a leader in museology, cultural criticism and the anthropology of art and aesthetics. Dr. Shelton has held posts at the British Museum Royal Pavilion Art Gallery and Museum, the Horniman Museum, London, and at the universities of Sussex, University College London and Coimbra, Portugal. He has curated or co-curated 13 innovative exhibitions, including Heaven, Hell and Somewhere In Between at MOA in 2015. Born in England, of French and Irish ancestry, he lives in Vancouver with his wife and three children.