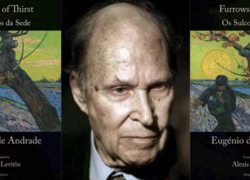 Eugénio de Andrade was Portugal’s most popular poet at the time of his death in 2005. In the course of his career, he won all of his country’s poetry awards, including the prestigious Camōes Prize, as well as The European Prize for Poetry and France’s Prix Jean Malrieu. Here in the United States, he is represented by eleven collections of finely-wrought verse, including Forbidden Words: Selected Poetry of Eugénio de Andrade from New Directions. This book is Eugénio’s last testament. It testifies to his love of life, both around him and within. It testifies to his enduring love of language and of music. The deepest eros of this man, this poet, beyond the desires of the body and the sensuality of nature, springs forth in his lifelong dedication to the sound of words. It is the eternal eros of the music of his song.

“A poetry of the body, a body with the potential of light, continually purified, that seeks out the word as a means of ascension.” — José Saramago (Nobel Prize for Literature, 1998)

“Levitin gives us the brilliance of de Andrade’s poetry in rich and musical language. We owe him a debt for illuminating the work of this superb contemporary poet.”–Colette Inez

“For all his gentleness, his civility, it is a fierce solitary who speaks in these verses, a man on whom the terrible insistences of Rimbaud and Verlaine … have not been lost.” — Richard Howard

“Through the simplest and most elemental images, in a tone of melancholy wonder, Andrade’s last poems resonate with the mysterious silence of impending oblivion. Snow and fire, winter and summer, thirst and relief coexist in a dialectical dance of immediacy and memory whose rhythms are gracefully echoed in the subtle lyricism of Alexis Levitin’s translation.” — Stephen Kessler, translator of Desolation of the Chimera: Last Poems by Luis Cernuda

Eugénio de Andrade (1923-2005), probably Portugal’s most popular contemporary poet, won all of his country’s literary awards, including the prestigious Camões Prize (2001), whose previous winners included Jorge Amado and José Saramago; the Prize of the Associação Portuguesa de Escritores (1986), Prize D. Dinis from Casa de Mateus Foundation (1988), the Great Poetry Prize of the Portuguese Association of Writers (1989). His work has been translated into over twenty languages. His swan song, Furrows of Thirst [Os Sulcos da Sede, 2001], published two years before his death, is his twelfth collection to appear in English translation. He died in Porto in 2005 after prolonged neurological disease.

Alexis Levitin has published forty-six books in translation, mostly poetry from Portugal, Brazil, and Ecuador. In addition to four books by Salgado Maranhão including Consecration of the Wolves (The Bitter Oleander Press, 2021) and Palávora (Dialogos Books, 2019), his work includes Clarice Lispector’s Soulstorm and Eugénio de Andrade’s Forbidden Words, both from New Directions. He is a recipient of two NEA translation fellowships and has served as a Fulbright Lecturer at the Universities of Oporto and Coimbra, Portugal, The Catholic University in Guayaquil, Ecuador, and the Federal University of Santa Catarina, in Brazil. In addition, he has held translation residencies at the Banff Center, Canada, The European Translators Collegium in Straelen, Germany (twice), and the Rockefeller Foundation Study Center in Bellagio, Italy.