Book: ‘From Dictatorship to Democracy’ by Raphael Costa – Editor’s Note 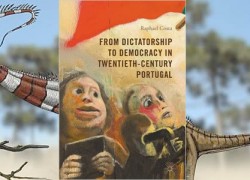 This book examines Portugal’s transition from dictatorship to democracy by focusing on Lourinhã’s urbanization and economic development since 1966. Since 1966, Lourinhã’s urban landscape has transformed as Portugal democratized. From a rural town with little infrastructure and few institutions in 1966, Lourinhã emerged by 2001 as a modern European town. This work highlights key areas of economic and urban development and argues that Lourinhã’s political culture became more institutional, creating a withering expectation of citizen participation in local development, as Portugal transitioned from dictatorship to democracy.

Raphael Costa asks whether Portugal was on the path towards democracy before 1974, and if the rapid shift to democracy was the blessing it appeared to be by the 1990s. Did democratization ultimately disenfranchise the Portuguese in important ways? This work uses Lourinhã’s development as an example of the Portuguese experience to argue that the Carnation Revolution, although a watershed in Portugal’s politico-cultural evolution, should not be understood as the moment when democracy came to Portugal.

Raphael Costa is an economic development professional with a keen interest in research and innovation in social entrepreneurship, community development, heritage and historical entrepreneurship, democratic development, and political culture. Dr. Costa holds a PhD that focuses on Economic Development and Governance. He has published on topics that include tourism development, municipal urban development as it pertains to political culture, and on heritage preservation. He has worked as an educator in Ontario, Canada universities, in the Co-Operative Banking sector, and is a founder and director of a not-for-profit corporation in the heritage public history sector. Currently he works as the Manager of the Vaughan Business Enterprise Centre (VBEC) in the Economic Development and Culture Services Department in the City of Vaughan. Previously he taught at York University and McMaster University in Ontario, Canada.