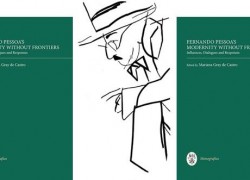 Portuguese writer Fernando Pessoa claimed that he did not evolve, but rather travelled. This book provides a state of the art panorama of Pessoa’s literary travels, particularly in the English-speaking world. Its eighteen short, jargon-free essays were written by the most distinguished Pessoa scholars across the globe. They explore the influence on Pessoa’s thinking of such writers as Whitman and Shakespeare, as well as his creative dialogues with figures ranging from decadent poets to the dark magician Aleister Crowley, and, finally, some of the ways in which he in turn has influenced others. They examine many different aspects of Pessoa’s work, ranging from the poetry of the heteronyms to the haunting prose of The Book of Disquiet, from esoteric writings to personal letters, from reading notes to unpublished texts. Fernando Pessoa’s Modernity Without Frontiers is a valuable introduction to this multifaceted modern master, intended for both students of modern literature and general readers interested in one of its major figures.

From Helder Macedo’s Foreword
Fernando Pessoa’s youthful ambition was to become an English-language poet and, with the exception of a small book of poems, Mensagem [Message] (1934), the books he published during his lifetime were all in English. Most of his vast output in Portuguese was scattered among literary magazines or remained unpublished at his death. In English, Pessoa is an old-fashioned, albeit interesting poet; in Portuguese, he is one of the world’s greatest modern poets. Fortunately, we can now read his work in good English translations and there are many perceptive English-language studies of Pessoa.

From Mariana Gray de Castro’s Introduction
Fernando Pessoa’s Modernity Without Frontiers: Influences, Dialogues and Responses, a title borrowed from Helder Macedo’s description of the Portuguese poet Fernando Pessoa’s work in the Foreword to this book, aims to provide a state-of-the-art panorama of the latest research being conducted on Pessoa’s national and international influences, artistic dialogues, and responses his work has generated. In making this scholarship available to an English-speaking readership, thus adding to the small number of books of essays on Pessoa in English, it equally hopes to cement his position at the heart of world literature.