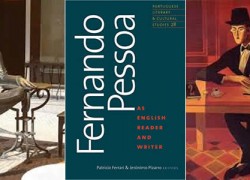 With Pessoa’s digitized private library online, the importance of English to Pessoa has become indisputable, particularly in his formative years: numerous English authors served as the bedrock from which his poetic sensibility emerged, developed and soared. In fact, a significant amount of Pessoa’s writings in English and in Portuguese (including those attributed to his heteronyms and/or to other literary personae) were greatly informed by these (his) original sources. Fernando Pessoa as English Reader and Writer provides ample evidence of his fruitful, lifelong relationship with the English language.

Jerónimo Pizarro is Professor at the Universidad de los Andes and holds the Camões Institute Chair of Portuguese Studies in Colombia. He has a PhD in Hispanic Literatures (Harvard University) and a PhD in Portuguese Linguistics (Universidade de Lisboa). He contributed seven volumes to the critical edition of Fernando Pessoa’s Works, published by the INCM. He is co-editor with Steffen Dix of Portuguese Modernisms in Literature and the Visual Arts ( Legenda, 2011). He won the Eduardo Lourenço Prize in 2013.