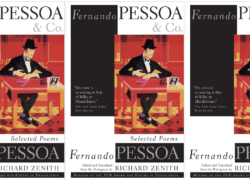 Fernando Pessoa (1888-1935) – a poet who lived most his life in Lisbon, Portugal, and who died in obscurity there – has in recent years gained international recognition as one of the greatest writers of the twentieth century. Now Richard Zenith has collected in a single volume all the major poetry of “one of the most extraordinary poetic talents the century has produced” (Microsoft Network’s Reading Forum). Fernando Pessoa was as much a creator of personas as he was of poetry, prose, and criticism. He wrote under numerous “heteronyms,” literary alter egos with fully fleshed identities and writing styles, who supported and criticized each other’s work in the margins of his drafts and in the literary journals of the time. From spare minimalism to a revolutionary exuberance that recalls Leaves of Grass, Pessoa’s oeuvre was radically new and anticipated contemporary literary concerns to an unnerving degree. The first comprehensive edition of Pessoa’s poetry in the English language, Fernando Pessoa & Co. is a work of extraordinary depth and poetic precision. “Zenith’s selection of Pessoa is a beautiful one-volume course in the soul of the twentieth century.” – Booklist

Fernando Pessoa (1888-1935) was born in Lisbon, spent nine years of his childhood in Durban, South Africa, and then returned to his native city, where he earned a modest income as a commercial translator and lived for his writing. Most of his vast body of work was published posthumously.

Richard Zenith is an acclaimed translator and the author of Pessoa: A Biography. He produced the first complete English translation of Pessoa’s The Book of Disquiet and won the PEN Award for Poetry in Translation with Fernando Pessoa and Co.: Selected Poems. He lives in Lisbon, Portugal.