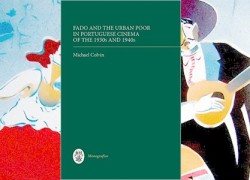 Colvin studies the evolution of Fado music as the soundtrack to the Portuguese talkie. He analyzes the most successful Portuguese films of the first two decades of the Estado Novo era to understand how directors used the “national song” to promote the values of the young Regime regarding the poor inhabitants of Lisbon’s popular neighborhoods. He considers the aesthetic, technological, and social advances that accompany the progress of the Estado Novo — Futurism; the development of sound film; the inception of national radio broadcast; access to the automobile; and urban renewal — within a historical context that considers Portugal’s global profile at the time of António de Oliveira Salazar’s rise to power and the inauguration of António Ferro’s Secretariado da Propaganda Nacional [Ministry of National Propaganda]; Portugal’s role as a secret ally of the Falange during the Spanish Civil War; Lisbon’s role as a neutral refuge during World War II; and the Portuguese Colonial Empire as an anachronism in the post-World War II years. Colvin argues that Portuguese directors have exploited the growing popularity of the Fado and Lisbon’s fadistas to dissuade citizens from alien values that promote individual ambitions and the notion of an easy life of poverty in the Capital. As the public image of the Fado evolves, the fadista’s role in film becomes more prominent and eventually, the fadista is the protagonist and the Fado, the principal concern of national film. The author exposes the irony that as the social profile of the Lisbon fadista improves with the international fame of singer Amália Rodrigues, Portuguese film perpetuates and validates the outdated characterization of the fadista as a social pariah that Leitão de Barros had proposed in the first Portuguese talkie, A Severa (1931).