Published in 1962, this short story collection foreshadows two other iconic 1960s works—by the Mozambican Honwana and the Angolan Vieira—in the way it invites its readers to consider a range of ethical issues at a watershed moment during the Salazar dictatorship in Portugal. It alternates between allegorical pieces, endowed with a fable-like quality, such as a modern reworking of the Three Kings biblical story, and more immediate first-person tales focusing on the formative experiences of an autobiographical narrator. Sophia, widely acknowledged as one of Portugal’s greatest poets, perhaps second only to Pessoa, uses an accessible yet beautifully lyrical language to propose that poetry, love, and holiness are not lofty ideals: they are within reach of everyone, in the fight against social injustice and complicit behavior. 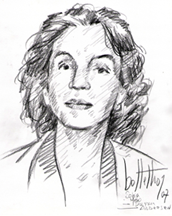 Portuguese poet and writer. In 2014, she was unanimously chosen by the Parliament with National Pantheon honors, the second woman to be so honored after Amália Rodrigues. Andresen won acclaim as a storyteller with Contos Exemplares (Exemplary Tales),Histórias da Terra e do Mar (Stories of Land and Sea), and a number of children’s books — A Menina do Mar (The Sea Girl), O Cavaleiro da Dinamarca (The Danish Knight), A Floresta (The Forest), O Rapaz de Bronze (The Bronze Boy), A Fada Oriana (The Fairy Oriana). She also published several poetry books and anthologies, including: Poesia, Dual, Livro Sexto, Coral, Dia do Mar, No Tempo Dividido, Grades, O Nome das Coisas, As Ilhas, Antologia, Geografia, Navegações, O Búzio de Cós. In 1999 she became the first woman to receive the highest Portuguese award for poetry, the Prémio Camões. She was also awarded the Spanish Premio Reina Sofia in 2003. “Poetry,” she explained, “is my understanding of the universe, my way of relating to things, my participation in reality, my encounter with voices and images. This is why the poem speaks not of an ideal life but of a concrete one: the angle of a window, the resonance of streets, cities and rooms, the shadow cast by a wall, a sudden face, the silence, distance and brightness of the stars, the night’s breath, the scent of linden and of oregano.”

About the Translator
Alexis Levitin

About the Introduction
Cláudia Pazos-Alonso

penned the introduction for this book. Dr. Pazos-Alonso is a University of Oxford lecturer in Portuguese and Brazilian Studies, and a Senior Research Fellow of Wadham College. Her research examines Portuguese and Brazilian literature from the nineteenth century to the present day and twentieth century literature from Portuguese-speaking Africa. Her interests include genre and gender, canon-formation; women writers and images of women; Portuguese modernism; the role of literature in colonial and post-colonial representations of the nation.