Book: ‘Essays on Some Maladies of Angola’ – Editor’s Note

Western science and pharmacology first learned about many African diseases, remedies, and medicinal practices through José Pinto de Azeredo’s highly original and influential text. A unique Enlightenment-era medical text written specifically about health issues in Angola, this is the first work by a Portuguese physician to describe accurately, through first-hand observation, medical practices and substances used in Angola during the peak period of the transatlantic slave trade. 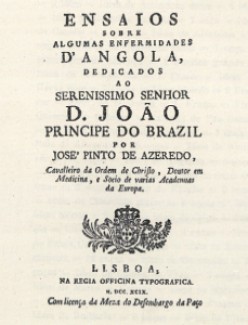 José Pinto de Azeredo, of Rio de Janeiro, studied medicine and conducted notable experimental research in Edinburgh (1786-88), presenting his graduate thesis on gout in Leiden. Already appointed surgeon-general of Angola, he returned to Rio in 1789 and practiced medicine in Brazil. In 1790 he moved to Luanda, where he practiced at the Hospital Real and founded a medical school that did not survive his departure for Portugal in 1797. He worked at Lisbon’s main military hospital and as a private physician until his death. His written works (some ten manuscripts and five publications) warrant an examination from the perspective of the history of medicine. In an article published in 1790 on Rio de Janeiro’s air quality, he reveals the skills of an analytical chemist, his interest in the effects of different air components on organisms, and his concern with air quality in Brazil and Europe. If you can read Portuguese, you will find a detailed biography of this author here.

Dr. Timothy Walker (B.A., Hiram College, 1986; M.A., Ph.D., Boston University, 2001) is an associate professor of history at the University of Massachusetts Dartmouth. At UMD, he serves as Fulbright Program Advisor (faculty and students); Associate Director of the Center for Portuguese Studies and Culture (2007-2009); a member of the graduate faculty of the Department of Portuguese Studies; and an affiliated faculty member of the Center of Indian Studies and Program in Women’s Studies. Walker is also an Affiliated Researcher of the Centro de História de Além-Mar (CHAM); Universidade Nova de Lisboa, Portugal. From 1994 to 2003, he was a visiting professor at the Universidade Aberta in Lisbon. During Fall Term 2010 Walker was a visiting professor at Brown University. Walker is the recipient of a Fulbright dissertation fellowship to Portugal (1996-1997), a doctoral research fellowship from the Portuguese Camões Institute (1995-1996), and a NEH-funded American Institute for Indian Studies Professional Development Grant for post-doctoral work in India (2000-2002). Walker has also been named a fellow of the Portuguese Orient Foundation (Fundação Oriente), the Luso-American Development Foundation (2003 & 2008), and has held a Wellcome Trust Travel Grant to the Wellcome Trust Centre for the History of Medicine at University College, London (Spring 2003). Walker also worked as a Lisbon-based researcher (1999-2001) on the Atlantic Slave Trade CD-Rom Database Project (Cambridge U. Press; D. Eltis, S. Behrendt & D. Richardson) and on the Global History of Leprosy Project, Wellcome Unit for the History of Medicine, Oxford University (2003). During the 2003-2004 academic year, Walker taught for the University of Pittsburgh Semester at Sea program. From 2005 to 2007 he held a U.C. Davis/Mars Research Fellowship while working on the “Colonial Chocolate Project,” coordinated through the University of California Davis Department of Nutrition. He remains a consultant for the Historical Division of Mars, Inc. In 2007, Walker was named a senior researcher on a National Science Foundation-funded project to study the competitive sharing of contested religious sites around the globe (2007-2011). Beginning in December 2010 he held a fellowship from the Gulbenkian Foundation in Lisbon, Portugal, to support the writing of a new monograph on Indo-Portuguese colonial medicine and hybridized medical culture. Most recently, Walker was named a National Endowment for the Humanities Fellow (July 2012-June 2013).

Adelino Cardoso obtained the PhD in History of Modern Philosophy at the University of Lisbon, with a dissertation on “The work of mediation in the Leibnizian thought” (2003), within which he aimed to give, simultaneously, a new perspective on the Leibnizian way of intelligibility and on the complex framework of the modernity. In fact, the connection between philosophy, science, morality and religion is a source of controversies among the most relevant thinkers as Hobbes, Spinoza, Malebranche, Arnauld, Bayle. His subsequent research has been always concerned with this style of work, combining a singular way of intelligibility with a wider intellectual horizon.

Manuel Barroso Silvério Marques, born in Lisbon in 1946, MD, PhD. Clinical Hematologist (IPO, Portuguese Institute of Oncology, Lisbon). Since 1985: member of the Philosophy of Knowledge Cabinet (Chair: Fernando Gil) and since 2005: member of the Center of Philosophy, Faculty of Humanities, Lisbon University; in 2006 retired from the IPO. In 2007-2006, member of the Board the National Council of Ethics on Clinical Research and, in 2004-2002, member of the Board of the National Ethics Committe. Visiting Associate Fellow at the Darwin College, Cambridge University, in 1999 and in 1990 Visiting staff of the Unité Fonctionelle de Greffes Medullaires, Centre Léon Bérard, Lyon. Lecturer on Hematology, Bioethics, Philosophy of Medicine in several pre- and post-doc Courses in various Medical Universities and Hospitals. Dozens of papers and two books published. Latest papers: “A febre, a fibra e o espasmo” (“Fever, fiber and spasm”) BNP, Lisboa, 2010; “Contágio. Contribuição para a Epistemologia e a Ética da Saúde Pública” (“Contagion…”) ActaMedPort, 23, 2010.