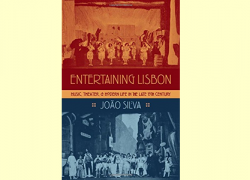 During the decades leading up to 1910, Portugal saw vast material improvements under the guise of modernization while in the midst of a significant political transformation — the establishment of the Portuguese First Republic. Urban planning, everyday life, and innovation merged in a rapidly changing Lisbon. Leisure activities for the citizens of the First Republic began to include new forms of musical theater, including operetta and the “teatro de revista”. These theatrical forms became an important site for the display of modernity, and the representation of a new national identity.

Author João Silva argues that the rise of these genres is inextricably bound to the complex process through which the idea of Portugal was presented, naturalized, and commodified as a modern nation-state. Entertaining Lisbon studies popular entertainment in Portugal and its connections with modern life and nation-building, showing that the promotion of the nation through entertainment permeated the market for cultural goods.

Exploring the Portuguese entertainment market as a reflection of ongoing negotiations between local, national, and transnational influences on identity, Silva intertwines representations of gender, class, ethnicity, and technology with theatrical repertoires, street sounds, and domestic music making. An essential work on Portuguese music in the English language, Entertaining Lisbon is a critical study for scholars and students of musicology interested in Portugal, and popular and theatrical musics, as well as historical ethnomusicologists, cultural historians, and urban planning researchers interested in the development of material culture.

João Silva received his PhD from Newcastle University in 2012 where he was editorial assistant for the journal Radical Musicology. He studied at the Universidade Nova de Lisboa and teaches in several music schools in Portugal, namely the Academia de Música de Espinho, the Escola de Música Óscar da Silva, and Escola Profissional de Música de Espinho. An active researcher in INET-MD since 2003, he was involved with editorial responsibilities in the Enciclopédia da Música em Portugal no Século XX project. He writes program notes for the foremost cultural promoters in Portugal, like the Fundação Calouste Gulbenkian, Casa da Música, and Culturgest. He regularly contributes for both local and international publications and his main research interests focus on late nineteenth-century musical cultures and their relations with modernity, nationalism, historiography, and technology.