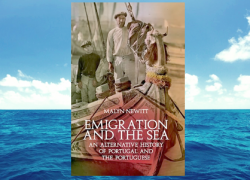 Today Portuguese is the seventh most widely spoken language in the world and Brazil is a new economic powerhouse. Both phenomena result from the Portuguese ‘Discoveries’ of the 15th and 16th centuries, and the Catholic missions that planted Portuguese communities in every continent. Some were part of the Portuguese empire but many survived independently under other rulers with their own Creole languages and indigenized Portuguese culture. In the 19th and 20th centuries these were joined by millions of economic migrants who established Portuguese settlements in Europe, North America, Venezuela and South Africa – and in less likely places, including Bermuda, Guyana and Hawaii.

Interwoven within this global history of the diaspora are stories of the Portuguese who left mainland Portugal and the islands, the lives of the Sephardic Jews, the African slaves imported into the Atlantic Islands and Brazil and the Goans who later spread along the imperial highways of Portugal and Britain. Much of Portugal’s contribution to science and the arts, as well as its influence in the modern world, can be attributed to the members of these widely scattered Portuguese communities, and these are given their due in Newitt’s engrossing volume