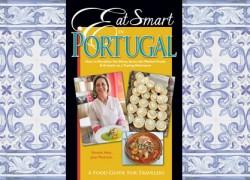 The diminutive size of Portugal, a land area about the size of the U.S. state of Indiana, would suggest that there is not much culinary difference across the regions. Yet, given Portugal’s distinctive and variable geography, the country has preserved hundreds of different regionally-specific cooking traditions that are being honored in starred Michelin restaurants and increasingly recognized around the globe.

Portugal’s proximity to Spain has given rise to a misconception about Portuguese gastronomy. It is often, incorrectly, lumped with Spanish cookery. While the two countries share common ingredients onions, garlic, olives and olive oil, tomatoes and peppers, rice and fish (especially bacalhau, or salt cod) as well as cooking methods, and while both cuisines are straightforward, honest, hearty, robust and filling, there are many distinctions between the two.

Portuguese cooking has been called more nuanced and florid than that of its neighbor, even more buttery and sweet. The common use of spices, such as cinnamon and cumin, and fruits and vegetables, acknowledges Portugal’s early maritime and colonial history, its trade routes around the globe begun in the 15th century.

Like all the culinary guides in the EAT SMART series, Eat Smart in Portugal never goes out of date. It connects menus and markets to geography, history, and regional pride.

Ronnie Hess is a writer and poet that grew up in New York City, attended the Lycée Français of New York and Julia Richman High School, and graduated from Hunter College, the City University of New York. She earned a master’s degree in history from the University of Wisconsin-Madison. She began a career in broadcast journalism at Wisconsin Public Radio. In the 1980s, she was a reporter/producer for CBS News in Paris, spending nearly four years in France reporting on political, social, and cultural issues. After she returned to the Midwest, she worked for Minnesota Public Radio and Chicago Public Radio and was a freelance writer/producer for the “American Justice” series that aired on A&E. Returning to UW-Madison, she became director of communications in the Division of International Studies. During a sabbatical year, from 2004 to 2005, she taught middle school English in France. She has contributed to many publications – national, regional and local – including Mi>Saveur, The Christian Science Monitor, and The Milwaukee Journal Sentinel. She was restaurant critic for several years for Madison Magazine and was a freelance arts critic for The Capital Times. Until December 2011, she was a consultant to the Wisconsin Academy of Sciences, Arts and Letters, directing the Academy’s special events planning. She travels to France frequently and blogs every month for MyFrenchLife. To see recent posts go to http://myfrenchlife.org/ Hess is an at-large member of the Wisconsin Poet Laureate Commission. Hess was a Knight Fellow (then Professional Journalism Fellow) at Stanford University in 1978-79 and has received other journalism awards. She received a writer’s grant in June 2006 to the Vermont Studio Center.

Joan Peterson is the Publisher (Ginkgo Press) of the EAT SMART series of guidebooks designed for travelers and cookbook lovers. To date she has written guides to the cuisines of Brazil, Turkey, Indonesia, Mexico, Poland, Morocco, Sicily, India, Peru, and Norway. She has traveled extensively for many years, and leads culinary tours to Turkey, India, Morocco, Peru, and Sicily. EAT SMART guides written for Ginkgo Press by others include France (Ronnie L. Hess) and Germany (Mary Bergin).