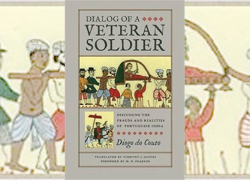 Fraud, scandal, theft of royal funds, official graft, and cover-ups: these are the subjects of the 1612 exposé written by Diogo do Couto in his Dialog of a Veteran Soldier. Couto revealed too much and as a result, this work had to wait more than 175 years until its first publication in 1790. This classic of overseas Portuguese history is a well-known source cited by historians of Portuguese Asia, yet it has remained beyond the reach of a larger audience until this translation—its first into any other language. Couto was never rewarded with any of the prized positions that viceroys and governors (according to him) showered on their underlings. This Dialog is his bitter response. In it, we can see the workings of official and informal administration of Portuguese Asia as well as the numerous remedies Couto suggests to correct these abuses.

was born in Lisbon in 1542 and studied Latin and Rhetoric at Saint Antão College and philosophy at the convent at Benfica. In March 1559 he traveled to Portuguese India, whence he would not return for a decade; as a soldier he took part in the Surrat campaign in March 1560, living in Baroche in 1563. Returns to Lisbon with D.António de Noronha in 1569. He was a close friend of the poet Luís de Camões, and described him in Ilha de Moçambique in 1569, indebted and unable to fund his return to Portugal. Couto and other friends took it upon themselves to help Camões, who was thus enabled to take his most significant work, The Lusiads, to the capital. Couto arrived in Lisbon on board the Santa Clara in April 1570. Shortly after Couto returns to India in the Armada of D. António de Noronha; marries with Luisa de Melo in Goa, and works in a supply warehouse. In 1595, shortly after completing the first Década Couto is invited to organize the Goa archive, being appointed “Guarda-Mor do Tombo da India”, and to continue writing the Décadas started by historian João de Barros. In his life time were published the 4th, 5th, 6th and 7th Décadas. When Couto died, his other works were in the hands of his brother-in-law, the priest Deodato da Trindade.

Timothy J. Coates is Professor of History at the College of Charleston and formerly the Vasco da Gama Visiting Professor of Portuguese History at Brown University. He has also taught as visiting professor at the University of Massachusetts Dartmouth and the Universidade de Lisboa. He has conducted research and lectured in Portugal, India, Brazil, and Macau. Professor Coates organized two international conferences at the College of Charleston to celebrate the 500th anniversaries of Vasco da Gama’s arrival in India and Pedro Cabral in Brazil. He is the author of Convicts and Orphans: Forced and State-Sponsored Colonizers in the Portuguese Empire, 1550–1755, a Portuguese translation of this book was published in 1998 by the National Commission for the Commemoration of the Discoveries of Lisbon. Coates is also the translator of André João Antonil’s Brazil at the Dawn of the Eighteenth Century (Tagus Press, 2012).

Michael N. Pearson is Emeritus Professor at the University of New South Wales, Australia. Dr. Pearson holds a PhD from the University of Michigan, and is a Fellow Australian Academy of the Humanities. Besides many academic articles and book chapters, Dr. Pearson in the author of several books, including Eyes across the water : navigating the Indian Ocean (2010), The Indian Ocean (2003), India and the Indian Ocean, 1500-1800(1999), Port Cities and Intruders: the Swahili Coast, India and Portugal in the early modern era(1998).