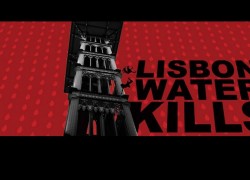 If you are a fan of international mysteries, looking for a book to read this summer – look no further!  Lisbon Water Kills is your next great beach read.

Set in present-day Portugal’s financial crisis, Lisbon Water Kills is a detective story co-authored by journalists Axel G. Bugge (Reuters) and Barry Hatton (Associated Press), senior Lisbon-based foreign correspondents. The book tells of an international police procedural involving what appears to be a serial murderer on the loose in Lisbon.

According to the authors, they came up with the plot and mapped out the story line during weekly dinner meetings.  “We simply divided up the chapters and agreed who would write which one. Since there are several plot lines in the book, we pretty much split them up accordingly. We then read over each other’s’ chapters and edited them. It turned out to be a lot of fun – and as one famous author once commented, if you don’t enjoy writing the book, readers won’t enjoy it either,” they told the press in Lisbon.

The main protagonist features a female cop, Antonia Fortunata, a Portuguese born Luso-American from a Massachusetts small town who returns to Portugal and ties up with her love interest Miguel Soares, the Portuguese detective investigating the suspicious deaths of a lesbian couple in downtown Lisbon.

The action takes Antonia on the trail of a transnational criminal gang where all the characters are connected, but the how and why aren’t always obvious. In the course of her investigating, Antonia becomes overly involved in this action thriller leading to the discovery of a political conspiracy involving foreign plotters, national traitors and drug smugglers with a subversive  agenda.

The vivid narrative of Lisbon Water Kills stands for what it is; a fast-paced gripping crime novel coming just in time for your summer reading.

Axel G. Bugge has been posted in Portugal with Reuters for nine years, having previously worked as a foreign correspondent in Denmark, England, Argentina and Brazil.  Barry Hatton has been the correspondent in Lisbon for the The Associated Press since 1997. He is the author of  The Portuguese: A Modern History (2011) and co-author of “Uma História para o Futuro – Maria de Lourdes Pintasilgo ( 2007) a biography of Portugal’s first woman prime minister.